“Werewolf Rising” revolves around Emma (Melissa Carnell), a big city girl moving back to her secluded childhood home in the country after a long stint of battling alcoholism. But working on keeping her sobriety is a piece of cake compared to the full moon nights as werewolves roam the forest. Her relaxing vacation has turned into a nightmare when the wolves start to hunt her and her secluded getaway home has her trapped.

When I was a young lad, I remember watching old movies where actors dressed up in really bad Ape or Werewolf costumes and they would chase after the damsel in distress as she screams her head off. “Werewolf Rising” welcomed me back to my childhood with a big embracing hug made up of offbeat werewolf makeup and costumes. Nothing wrong with a man (or woman) in a fur coat with a immobile headpiece, but there is something campy in nature about the whole scenario. 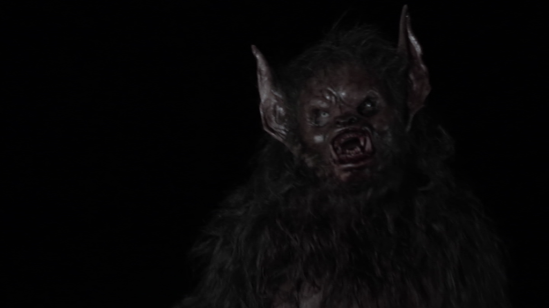 In cahoots with the “classic” costuming, the story and acting are made up of the best b-movie attributes. From Matt Compko’s character Johnny Lee and his goofy-serious posture and speech to Bill Oberst Jr.’s overzealous portrayal of an escaped werewolf convict, B-movie madness is back in full swing. Speaking of Bill Oberst Jr., the veteran B-movie actor is a man on a movie role mission. The guy has way too many upcoming roles on his plate, but with a mug like his, I can see why he can be very versatile to filmmakers. In “Werewolf Rising”, Oberst is one creepy dude covered in blood and mucus – lets just leave it at that. 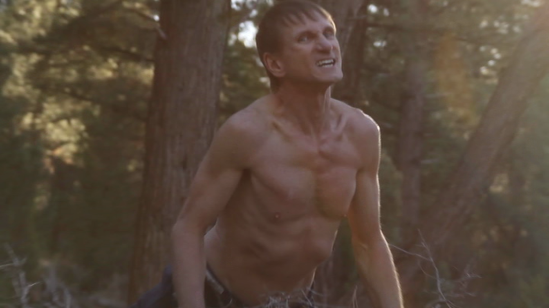 After 24 hours of having watched “Werewolf Rising”, I’m still trying to puzzle together to plot. I get that our heroine Emma retreats to her childhood home after a long and hard battle with alcoholism, but what does alcoholism really have to do with werewolves? What’s the parallel there? There seemed to be some underlying message that states drinking an colossal amount of hard alcohol, werewolves (or your demons) will come back into your life or am I reading too much into this B-movie? We see the same kind of alcoholism with the character Wayne played by Brian Berry so I could be correct. A blind squirrel finds a nut every once and awhile.

For the werewolves, how and why do they come into play? These creatures just happened to appear in the woods at this very particular moment with no explanation. Beatrix, played by Irena Murphy, seems to have some sense of what is going on as she waits in the woods for the beast. Emma involvement has more lycanthrope lineage, but again, the detail is limited and complex that nothing makes any real sense. I can tell you this. These werewolves love to go for the throat, they love to take long runs in the woods, and their red-tinted, nearly blind night vision sucks.

You have to hand it to writer/director BC Furtney because he was able to bare all with Irena Murphy’s character! But in all seriousness, Furtney tries his hand at direct-to-DVD horror and doesn’t come away exactly breaking even, but there is still some pride to be taken away from this piece of work. “Werewolf Rising’s” cast also includes Taylor Horneman as the man in the werewolf suit and Danielle Lozeau who you might remember completely buff from my review of “Black Water Vampire.” Werewolf Rising will be available to own September 8, 2014 in the uK from Image and RLJ Entertainment.