Living free from job responsibilities and able to workout whenever he wants, body builder Naoto is living the high life. His daily workout is interrupted by his former photojournalist ex-girlfriend in search of the next haunted house for her latest article and she calls Naoto to inquire his father’s old, creepy home that’s now in Naoto’s possession. Accompanied by a professional psychic, the three conduct a house call to get a presence reading and take pictures of the rundown, abandoned home. They find themselves trapped inside with Naoto’s father’s darkest secret malevolently toying with them and holding them hostage with her cursed power bestowed upon her death, 30 years ago, forsaken to her by the hands of Naoto’s fahter.

In 2014, first time director Shinichi Fukazawa’s endearment for Sam Raimi’s “The Evil Dead” has encouraged the filmmaker to tribute a film that has dubbed “The Japanese Evil Dead.” With all the depictions of Raimi’s film, including from a shotgun, an axe, and even a severed sarcastic-spewing mangled demon head, “Bloody Muscle Body Builder in Hell” views just as good as the sounds. Taking his film to the next level by going back in a time warp, Fukazawa de-amplifies the image quality with a lo-fi flare that adds chaotic charm bathed in retro-VHS vision as every desaturated hue and blanket of coarse grain is a step back in time. Fukazawa implements his own sturdy brand of macabre to branch his version of “The Evil Dead.” For instance, Fukazawa removes the Necronomicon, the book of the dead, all together. Instead, the director doesn’t forth put an outright explanation behind the cause of the cursed’s murderous revenge other than holding a jealous grudge and the lack of motivation is okay because “Bloody Muscle Body Builder in Hell” is a modern day video nasty. 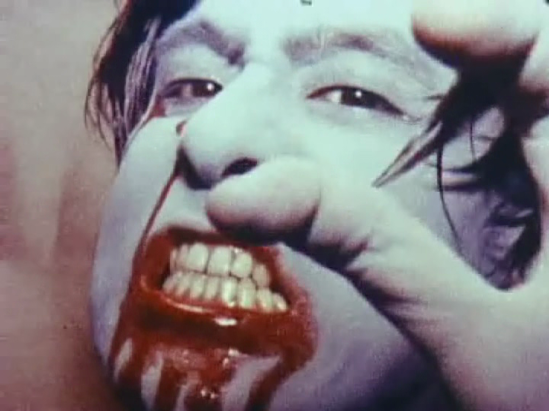 Shinichi Fukazawa, himself, stars as Naoto, suffering every ding, boink, and bop as our hapless hero that’s aims to strike similarities to Ashley “Ash” Williams and his gift of being the king of Three Stooges foolishness. Fukazawa plays a more conservative character in comparison, but does manage spit out memorable one-liners made genre famous by Bruce Campbell, like “groovy.” THe lead actress, Asako Nosaka, holds her own as a lovely damsel in distress who can double on a dime as a Mike Tyson speed bag puncher. The trapped pair make a convincingly distressed protagonists, especially in such a small Japanese home that’s the equivalent to a cabin in the woods. Last on the roster is Masaaki Kai filling in the psychic’s shoes and conjures an performance that’s could fit right in with the Kandarian Cheryl, Scott, Linda, and Shelley demons. 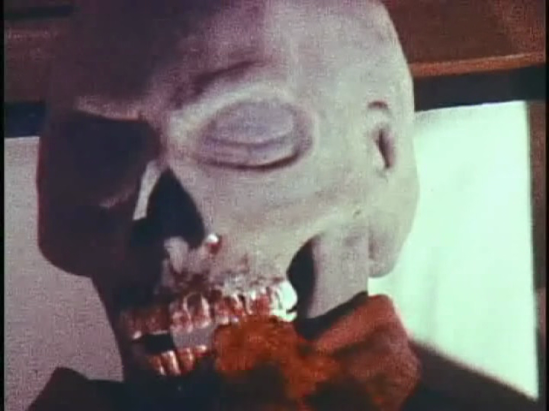 “Bloody Muscle Body Builder in Hell” is a 2014 effects driven, blood hungry roller coaster of pure mayhem entertainment. The ingeniously creative special effects, on a shoe string budget, are made of eye-popping, skull-crushing, and limb-parting goodness that every horror fan can appreciate and love. The lo-fi cinema and melancholy horror fixes to not impress those who have a taste for the CGI eye candy and won’t knock your socks off with the latest and greatest technological, animated advances in effects that attempts to mock real life, but accomplishes the opposite in the fabricated grindhouse reel with overexposures and rough edges that are more fitting for the subject matter. Fukazawa does embody Raimi’s creative editing and angle vision that makes Fukazawa’s film feel very attached to “The Evil Dead” franchise. 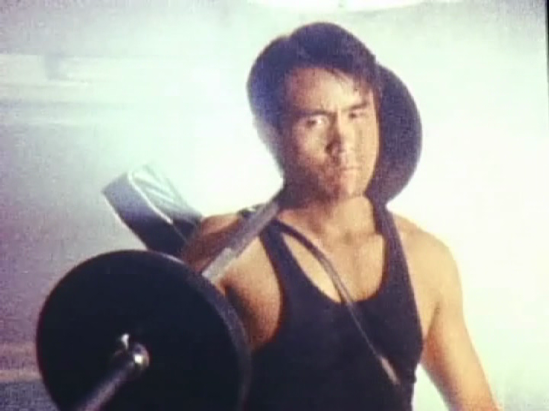 The well-meshed video nasty mingles Japanese culture with a loving tribute to Raimi’s “The Evil Dead” franchise and kicks off Shinichi Fukazawa’s most interesting silver screen career. Terracotta Distribution’s “Bloody Muscle Body Builder in Hell” is a tightly packed 62-minute joyride with squirrelly, demented demons with heavy emphasis on the blood and the gore. Image quality is poor and that’s a good thing! The low-tech fullscreen and unrefined quality are a tall-tell sign of a SOV gruesomeness surrounded by a fuzzy Japanese dual channel stereo. Extras includes a Graham Humprey time lapsed video of him creating his DVD artwork, a behind-the-scenes gallery, a dismemberment of scene clips, and Japanese and Terracotta trailers bringing up the tail end. “Bloody Muscle Body Builder in Hell” packs a punch, delivers the death, and gorges itself in the gore in this UK DVD from Terracotta Distribution! and is a lovely blend of comedy, horror, and praise that’s powerfully short and sweet from a freshman director who aims to make a statement while giving appreciation in his own culturally established way.