Tan and Javid go on a killing spree in anarchy-riddled Germany after their families were killed in a house fire in which emergency services were purposefully withheld. After slaying bystanders at a diner, they happen upon a script in a stolen car; the script reads line-by-line, word-for-word on everything the two men say and do. Simultaneously, the wealthy Eliana is hunting them down, seeking revenge for the death of her parents by collaborating with her parents’ former bodyguard to hire cold-blooded serial killers to kill the men. As Tan and Javid try desperately to not follow script, the two men seemingly can’t avoid their fate along with circumventing a variety of dangerous people crossing their path. Only a couple of people from the script can possibly save them, an Angel named Snowflake, and, possibly, the screenwriter himself.

Adolfo Kolmerer’s “Snowflake” has maybe little-to-no relevance to the derogatory term commonly used by right-winged conservatives when describing the assumed liberal millennial with a heightened sense of uniqueness and having a knack of being overly offended by, well basically, everything. Kolmerer’s “Snowflake” also has no correlation with the concept of winter, snow, or even Christmas. So, the question is, what the hell is “Snowflake” about? The 2017 shocker, also known originally as Schneeflockchen in the German language, is as cold and as unique as any snowflake mother nature can cruelly reign upon down a person and methodically compounds the series of gritty events, from two sets of characters, through a head-bearing funnel that’s supernaturally poised and brutally executed. From writer Arend Remmers, the script itself is smartly constructed as a narrative character, woven to become a pivotal motivator that not only churns out characters’ supposedly ill-fated destinies, but also a metaphysically, arch-able player in the grand scheme of gruesome revenge and absolute atonement that within the bookend pages of the treatment has unorthodox religious themes and a radical, almost anti-hero like quality of rising against the powers of racially insensitive autocratic and populist agendas. The film’s location of Berlin isn’t the only thing that’s anarchical driven as Kolmere and Remmers bends cinema conventional rules to enthrall one punch to the gut movie.

Erkan Acar and Reza Brojerdi play the brothers in arms, Tan and Javid. As they venture on nihilistically slaughtering quest to come face-to-face with their maker, Tan and Javid have nothing more to lose and Acar and Brojerdi depict themselves in that predicament while maintaining their characters’ seamless, longtime friendship, like watching two sets of personalities move as a single unit. Tan and Javid are hunted down by another character seeking vengeance for her parents are the wrong place, at the wrong time. Eliana has money, status, and all that she could ever want, but when she befriends her family’s bodyguard who is then let go from the position, she loses sight of the meaning of uncoupled protection in Berlin’s anarchy state and also loses sight of what’s truly important to her – her folks. When they’re slaughtered, Eliana, played by Xenia Assenza, is hellbent on exacting retribution. Assenza clearly proceeds with a cold, drafty personality for Eliana with unrelenting ambition. The character is scribed as ultimately over flawed if not even expressly obvious and Assenza does a fine job bubbling those flaws ever so delicately to the surface in every loss Eliana sustains. Tan, Javid, and Eliana have a very grounded reality about them when contrasted with other characters such as the superhero-esque Hyper Electro Man (Mathis Landwehr) with the steampunk power backpack of electrical power, a blind man named Fumo (Eskindir Tesfay) with fits of fury, and a madman named Caleb (“Braveheart’s” David Gant) who could very possibly be God himself. Electrifying, mysterious, and powerful can be their only descriptive adjectives that steer “Snowflake” into the graphic novel universe. David Masterson (“German Angst”), Gedeon Burkhard (“Inglourious Basterds”), Selam Tadese, Adrian Topol, Judith Hoersch, Alexander Shubert, and Antonio Wannek, Bruno Eyron, Martin Gores, Mehmek Kurtulus round out this amazing, eclectic cast.

On a single read through of the synopsis on the Artsploitation’s Blu-ray back cover, trying to process the quickly summed up tale might also quickly scorch and burn off invaluable brain cells, but “Snowflake” has an immensely alluring nature once reviewed on a second read. Might not be a tearjerking romantic comedy and can be stupendously offensive with hints of barbarism, but the fantasy element, infused with Western composition at times, is stone strong with this film that’s more than just a Tarantino or Coen brothers’ akin film as the summary impresses to potential viewers. I’d toss in their some steampunk aspects of early Terry Gilliam or the delicate fable-isms of Marc Forster. It’s also a little razor blunt like Takashi Miike and perhaps could have surrealistically lobotomized and strenuous dreamlike sequences that speak to the likes of David Lynch, in choice scenes. Adolfo Kolmerer can be considered an equivalent to not one, but all of these visual icons and mega storytelling filmmakers. 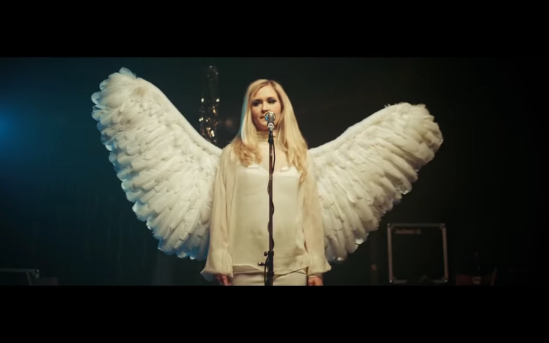 Truly unique like an ice crystal falling from the winter sky, “Snowflake” falls onto Blu-ray home video courtesy of Artsploitation Films. Presented in 1080 and in a widescreen format, “Snowflake” vividly impresses with a broad color palette and a sleek, crisp digital picture. Hyper Electro Man has vibrant electrical currents snaking around his body and arms that aren’t just blurry blobs, but maintain two-tones of color and depth. Various decrepit buildings have the details pop out to bring an anarchy German to life. The German-English-Polish Dolby Digital 5.1 audio track has range, balance, and fortitude with a clarity and prominence in all spoken dialects. English subtitles are available. Bonus features included a behind-the-scenes look at “Snowflake” that clocks in just under a hour and trailers of other Artsploitation films. “Snowflake” has an original frame that’s built to sustain the broken westernized violence and is tightly glued together with likable berserk characters and an engaging labyrinthine story that ultimately feels genuine, versatile, and thematically relevant in, nearly, a not-so-abstract vision.