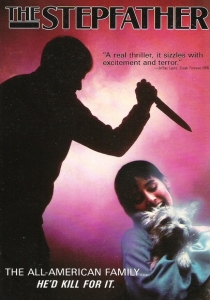 Powerful opening scenes are hard to come by as Hollywood’s creativity diminishes with each and every year.  In fact, creativity and imagination is practically dead in Tinsel Town.  Now-a-days, we have to rely on indie productions to fulfill the gaps of dullness in our lives when it comes to fantasy.  Luckily, our hi technological ways have brought us the power of recording images; in this case, VHS, DVD and Blu-ray.  Joseph Ruben directed a memorable opening scene of Terry O’Quinn, you know, the guy from the hit TV series Lost, walked down the stairs to a mutilated layout.  No words, hardly an action had to translate the scene.  This is a specific time in perfection.

Jerry Blake is a traditional family man; he enjoys dinner with his wife and child; he works in real estate and provides a good upbringing for the most inexcusable children.  This perfect husband is far from perfect. He’s actually a deranged psychopath in search for a traditional family setting and if they turn out disobedient, he turns them into sliced deli meat.  After he finishes up, he moves to another serene town on the lookout for a single mother with fatherless kids to work his way into and start all over again.

The brutality of the first scene never really carries over into the rest of the movie, but the thrilling factor of disturbing nature provided by Terry O’Quinn’s actions as Jerry Blake will strike fear into them as for the explosive and uncertain nature in which he brings Jerry to the screen.  The brief release of the opening scene takes us down that road of psychotics and family struggles.  The Stepfather also bares the struggles of introducing a stranger into an already existing and established family, replacing a father figure with this notion that some person can every replace them fully.  The protagonist, Stephanie, feels that something isn’t right with her new “father” and that being that is not really her father; however, turn outs of more malevolent intents came about that further’s Stephanie’s paranoia. 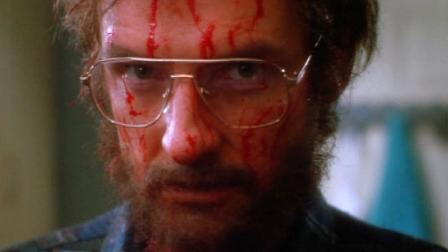 Shout! Factory releases it on DVD and Blu-ray; fortunately, I was able to review the Blu-ray release.  The transfer isn’t necessarily clear as one would expect from a hi-def release.  The Stepfather Blu-ray doesn’t stray too far from the image quality, but the audio is tremendously clear which is important for instill fear.  In all, one should be fairly pleased with the release, but there is no reason to stray from the less costly DVD version. 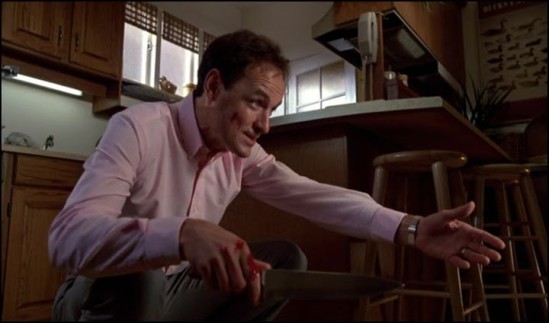