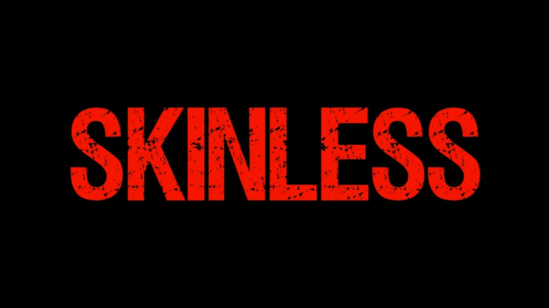 I’ve been following Dustin Mills and his films for quite some time now. From the ambitious, multi-role Zombie A-Hole to the from actual news to your for your home entertainment Bath Salt Zombies, producer, writer, and director Dustin Mills has all the makings of a great independent director. The latest indie feat for the ambitious director is “Skinless,” a fierce and grotesque body horror film that sparks a familiar resemblance to a certain David Cronenberg film but with more ooze and goo that will leave a sticky, slimy aftertaste sensation that makes the film difficult to look away from yet still hard to wash off once the credits roll.

“Skinless” revolves around brilliant scientist Dr. Peter Peele who suffers from a terminal condition of the cancerous melanoma. His only hope is a flesh-eating enzyme from an exotic worm. Peter’s research partner, Dr. Alice Cross, genetically modify’s the enzyme to attack only cancer cells. When Peter and Alice are refused backing funds for the project, Peter turns to a more radical approach to use his own body as a test subject even at Alice’s stern disapproval. The enzyme worked as the cancer cells were stricken from Peter’s body, but at the cost of losing all of his flesh and going through a metamorphose that drives Peter into a murderous monster.

It’s icky. It’s sticky. It’ll have your skin crawling literally of your muscle tissue. Dustin Mills and his body horror entry proves that heart still exists in independent films today. Brandon Salkil and Erin R. Ryan, a regular cast of actors used by Dustin Mills, star as Dr. Peter Peele and Dr. Alice Cross. These two have chemistry on screen making chemistry. Salkil co-wrote the script with Mills making his character, pre- and post- metamorphose, into completely separate entities. There is a serious tone change in Dr. Peele that results in Dr. Cross to change with him in the second act of this two act film. What I like about Salkil is his style of acting, much like his other roles in previous Mills’ work, resembles a “Dumb and Dumber” Lloyd Christmas from an alternative universe – fairly silly with a realistic handle and grip of tension and hostility.

Once you view “Skinless”, you might feel like you’ve had a dose of deja vu. I know I did. I started to compare “Skinless” to David Cronenberg’s remake of “The Fly” in which Jeff Goldblum plays an inventory who develops a transporter, uses himself as the first test subject, and has his DNA infused with a fly’s DNA. Much of the same qualities from “The Fly” are transposed to “Skinless” from the projectile digestive acids to the transforming fly-like-ticks each character develops through the metabolical change. Was “The Fly” a big inspiration for “Skinless?” I would like to think so since the evidence is hard to ignore, but is this an intentional homage or a re-write flying below the bar?

Any way you dissect it, one can’t deny the special effects from the crew with one name to mention in Brandon’s Salkil’s wife – Sherriah. There’s something to be said for creativity and invention in body horror films because without the transformation of Dr. Peele to this skinless, fleshing eating thing, you would literally have no movie. Some of the puppetry might some dated and cheesy, but campy and still can put a ripple up your spine to think and feel like you’re going through the flesh-deducing change yourself.

Whacked Movies and MVD bring you the latest and greatest of Dustin Mills Productions with “Skinless.” Check it out on DVD on November 18 and watch this sleazy take on a gory-glorified body horror film.