A four person punk rock band, known as The Dick-Punchers, kidnap an egotistical businessman named Todd because they suspect the white collar professional to be a vicious, man-eating werewolf.  Confined to a chair in an abandoned warehouse, Todd is interrogated, threatened, and tortured to reveal his true beastly self, but as the night drags on, the band’s evidence weakens against Todd and tensions boil to a flare as the band’s leader, Schafer, starts to question their suspicions and motives.  Doubts divide the band’s handling of the overwrought situation, especially when Todd’s wife tracks her husband’s phone to his exact location, hoping to catch him in an unfaithful act, but ends up becoming entangled in his internment.

Crafting a werewolf film on a microscopic budget is a daunting and difficult task to accomplish and having the resulting finish to be mediocre is a good achievement for any filmmaker whether working in the independent market or in the Hollywood limelight.  Writer-director Kurtis Spieler found a conduit through the immensely barbed brier patch for his 2013 indie horror film “Sheep Skin” and came out relatively unscathed by the pricks.  The ambitious werewolf flick was developed on the heels of his Spieler’s 2007 short film of the same title with actor Laurence Mullaney reprising his role of the kidnapped businessman, or maybe a werewolf in plain sight, Todd and with Nicholas Papazoglou returning as producer.  With a little more backing behind Spieler’s Invasive Image production company, the director was able to recreate his short to a feature film on a reported $25,000 budget.

The budget amount surely gives a bit of hesitation when going into a viewing of “Sheep Skin,” but by cutting down location costs and maintaining afloat with the equipment already obtained, Spieler puts his heart and soul into the cast of gifted actors and a talented crew and into a story that’s nail-bitingly entertaining without the possibility of a werewolf ever making an appearance on screen.  Along side the return of Laurence Mullaney, the relatively unknown Michael Schantz, who had a role in the Alistair Pitt episode of NBC’s popular espionage drama series “The Blacklist,” portrays Schafer, the vengeance seeking leader of The Dick-Punchers.  Schantz’s rendition of the character is undeniably acute to the rampant emotions and stakes of kidnapping and holding Todd.  Schafer’s band member and girlfriend, Dylan, portrayed by Ria Burns-Wilder finds an unwavering loyalty in her man.  The two wild cards, Clive and Marcus, filled in fittingly by Zach Gillette and Bryan Manley Davis.  Gillette and Davis play characters that contrast each other very strongly with Clive being more of a bruiser and a hot head looking forward to roid-rage mayhem while Marcus nervously questions his friends’ intentions if the situation goes south.  Jamie Lyn Bagley is an It’s Bloggin’ Evil favorite (see our reviews for “Flesh for the Inferno,” “Sins of Dracula,” “Frankenstein’s Hungry Dead,” and “Future Justice“) and the upcoming scream queen becomes the last puzzle piece to a dynamic cast as Todd’s mistrusting wife. 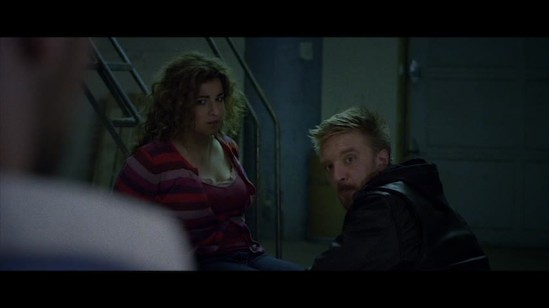 The kidnapping portion of the story starts from the get-go, nabbing Todd as soon as he attempts to leave the office.  After all introductions are completed and the plot is set, the pace slows down toward an uneventful position with characters vacillating.  Schafer holds many sidebar conversations with his crew, as a good captain should always do, but makes for tedious anticipation instead of white knuckling action.  The deceleration of content during this time doesn’t necessarily bore down the story as the characters react rightfully so due in part to Spieler intentionally incorporating doubt into The Dick-Punchers’ plan and when the snowball starts to roll downhill and the strain starts to disintegrate their plan and, ultimately, their friendship, “Sheep Skin” is a juggernaut of confined bloodletting.

Unearthed Films and MVDVisual courtesy releases Kurtis Speiler’s film onto DVD with a widescreen 2.35:1 aspect ratio that soaks in a noir style filter for a mysterious-horror atmosphere.  The DVD offers an alternate black and white version of the film that’s preferable as the dark filter kept the image devoid of natural colors.  Digital noise overtakes the brighter coloring in which DNR could have reduced the effect for a cleaner finish.  The noise also affected the Dolby Digital 2.0 audio with a  low lying hum throughout the background of the entire duration.  Dialogue tracks levels vary heavily during calmer or character enclosed scenes while the soundtrack booms out LFE during abrupt moments.  The DVD has a solid cache of extras including director’s commentary, deleted scene with director introduction, behind the scenes look at the making of “Sheep Skin,” the original short film, The Dick-Punchers music video, and the theatrical trailer.  “Sheep Skin” isn’t an archaic werewolf tale, but a fresh suspenseful spin on lycanthrope mythos.

BUY “Sheep Skin” on DVD from Unearthed Films and MVDVisual at Amazon.com! Just clink on the above image.