Seeking solace in his app-review video blog is the only part of Josh’s life that’s going well while the rest of his young life is a constant struggle. From the nasty breakup with his girlfriend, Genny, to a three month lapse in paying rent and all the while his mother battles a terminal condition, internally Josh desperately seeks help. As one part mobile application critique assignment and one part a way to help possibly boost his life situation, Josh accesses a new self-help app called “I-Lived” where inputting goals by the user are examined by the app that responds with step-by-step instructions on how to achieve the user’s goals. As Josh follows the app’s advice, his life begins to feel anew with his mother miraculously better, he obtains a new position at a major marketing firm, and he gains a gorgeous vixen girlfriend, but as Josh keeps using the app, the more the advice aggressively turns malicious and sticks him into a web of misconduct, pain, and murder that’s hard to break from, according to the app’s user contract agreement. 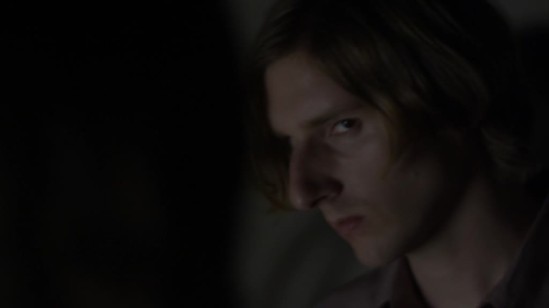 “I-Lived” is a 2015 technology horror film from “P2” and “Maniac” remake director Franck Khalfoun that rummages pieces and parts familiar to that of John Flynn’s 1994 film “Brainscan” and integrates them into the wish-gone-wrong films, the “Leprechaun” series, of the 1990s sans Warwick Davis’s mischief hellion. The comparisons aren’t intended to thwart “I-Lived’s” originality. To the contrary, Khalfoun has embarked on an eye-opening concept, ran with it alongside co-visionary Brian Breiter, and spun the Silicon Valley mobile applications into devilish, life ruining soul suckers. I know what I’m talking about it; I see apps, such as the Facebook app on my wife’s tablet, leave users mindless and obsessed everyday. We all want to believe technology was created to upscale our way of life for the better, but the vastness of possibilities stemmed from the engineered science can entomb, consume, and definitely doom us. Khalfoun slightly parodies the online reviewer (gee, thanks) with overzealousness and video editing creativity all the while dreaming of making the big bucks off internet, an infinite place where everybody’s opinion calls home.

This film also marks the first time Franck Khalfoun hasn’t collaborated with “High Tension” and “Horns” director Alexandre Aja on a horror film. Khalfoun proves he can stand alone, writing and directing a flashy, intensely disturbing and creative horror film sprinkled with moments of comedy cast forth by lead actor Jeremiah Watkins in an usual role. Watkins owns the turn on-off switch, laughing in the face of poverty and humility then, in an instant, being firm and cold once consumed with the “I-Lived” app that has a hand around his neck. With a solid storyline pace and on point performances by Watkins, Sarah Power, and Chris Mena, “I-Lived” clicks and drags obsolete modern day tech horror movies toward the trash bin icon.

Khalfoun and his crew perfectly edited scenes together to create a live streaming visual while also intentionally implementing story lined easter eggs that’ll be explained later in the film. Not all is peachy with “I-Lived” as I thought the ending was a bit underwhelming with a side of “eh.” The expectation to divulge more information was requisite to explain exactly what’s going inside the tormented mind of Josh; instead, the finale’s visceral image sears faintly into our mind’s eye. Also, quite a few characters are spent without development; examples lie with Josh’s former girlfriend, Genny, who makes brief interjecting initial appearance and with his best friend Bobby who takes a turn for the worse. Both characters came to a complete and sudden stop, hitting a wall after turning a pivotal corner and left lingering in limbo as to their fates.

To further immerse your movie experience, the “I-Lived” named app was actually created and is now available on Google Play and Itunes for download. The app is pure marketing genius, campaigning along with the movie as a video playback device. When you watch “I-Lived” through the app, it will send you timed messages and clues throughout the duration of the film, taking complete control over your phone’s speakers, vibration, and flashlight features. However, from the reviews I’ve read, the app sounds moderately successful, but the snazzy idea might be worth checking out. In all honesty, “I-Lived” doesn’t require marketing ploys to engage an audience; in fact, the thrill of seeing what the app will have Josh do next is well worth the price of admission. Who needs voices in their heads when an app on their phone can instruct them on who to kidnap or kill? GPS guides us into the middle of lakes or the center of gangland and, yet, still we follow. Same principal, only more contractually diabolic.

UK home entertainment distribution company Second Sight releases “I-Lived” on DVD July 11th or to catch the film early, “I-Lived” will be available for download on June 27th and on-demand July 4, just in time for the fireworks. I’m not able to properly critique the audio or video qualities as the disc delivered was a burned screener, but if the attributes are on par with the DVD, the video and audio appeared very sleek and clean, not being a rushed mess slapped together in a matter of days of post production, with an eclectic soundtrack from alternative artist Mathieu Carratier to hip-hop performer R.A. The Rugged Man. “I-Lived” epitomizes the phrase the ghost in the machine with reverberating terror that’ll make have you thinking twice about the next app downloaded.