Colleen Collette and Colleen McKenzie are best friends. They’re also two superficial 15-year-old girls who are nose deep into their social media campaigning cell phones, jamming in their girl punk band Glamthrax, and living by the unorthodox, yet namaste driven, yoga practices while exasperatingly working at one of girl’s father’s convenient stores called “Eh-2-Zed.” Set in the Great White North of Canada, the Winnipeg, Manitoba sophomores are surprisingly invited to a senior party, a lure by a popular, good-looking senior boy who has a darker, Satanic side to him. The Colleen girls’ run in with a murderous devil worshipping senior inadvertently opens another hidden danger lurking 37 feet beneath their “Eh-2-Zed” soles. A slumbering Nazi mad scientists has been awoken and aims to finish his Third Reich master plan to take over Canada with a cloned army of Bratzis, living Bratwurst sausages who are pint-sizes Nazis, and seeks to unleash evil upon the Manitoba Earth.

Kevin Smith’s latest pop-cultural flick, a comedy-horror feature, entitled “Yoga Hosers” is the second installment, following 2014’s film “Tusk”, in Smith’s horror-inspired trilogy known as The True North Trilogy. Did you noticed I labeled “Yoga Hosers” as a comedy-horror instead of a horror-comedy? The “Mallrats” and “Clerks” director basks more in the familiarity of witty, profane humor in this second of three films, but Kevin Smith has known to dapple, gradually stepping over to the dark side into horror with his radical religious sect piece “Red State” and, like aforementioned, the body-horror “Tusk.” The Jersey native also has an occasional appearance on AMC’s “The Talking Dead,” a talk show about “The Walking Dead’s” post-premier of each episode, and has meddled in the realm of the fantastic. Not only is Smith a strong advocate and sincerely passionate comic book enthusiast, coinciding with his own AMC show “The Comic Book Men,” but “Dogma,” starring the late Alan Rickman, delivers divine revelations and, now, with “Yoga Hosers,” a villainous Nazi clones miniature Bratwurst soldiers. Smith holds, in my opinion, one of the most extremely diverse bodies of work in our lifetime.

Where as “Tusk” goes gritty and gory with R rated horror-comedy, Smith’s intentions for “Yoga Hosers” has always leaned toward that of PG-13 and, maybe, that’s due in part of the two films’ minoring connection. The connection, presumably set in the same whacked out alternate universe, stem from the two Colleens, one played by Smith’s hysterically funny daughter, Harley Quinn Smith, and the other being Harley’s longtime, kindergarden friend Lily-Rose Depp. Yes, the daughter of mega star Johnny Depp and French singer Vanessa Paradis brings her inherited talent and French dialect to one-half of a buddy comedy. The 15-year old girls, who are also 15-year old in character, transfer their natural offscreen relationship into being an entitled millennial pair with every intent on neglecting responsibility until faced with the moment of truth. Teamed up well with Lily-Rose’s father, Johnny Depp, under the heavy makeup of a fictional French manhunter named Guy Lapointe, also from “Tusk,” with scene-to-scene rotating facial mole, the crime fighting, buddy trio awkwardly moves across the plain in an enjoyable double entendre performance of simple wit. Accompanying Depp, Smith, and Depp are an eclectic roster of Kevin Smith’s usuals such as Justin Long (“Tusk,” “Jeepers Creepers”) as a reality-severed Yoga instructor named Yogi Bayer, Jason Mewes (“Jay and Silent Bob Strike Back”) in a bit part, and, of course, Kevin Smith himself as the devilish Bratzis. New faces also make the scene with an unrecognizable Haley Joel Osment (“Sixth Sense”) as a young Canadian Nazi and “Orange is the New Black” Natasha Lyonne portraying a slutty Eh-2-Zed manager who sleeps her way to the top with Colleen C’s father, “Veep’s” Tony Hale.

“Yoga Hosers” explodes with Canadian farce that’s laced heavily with jokes on ‘aboots,’ hockey jersey-wearing patrons, an alternate version of Lucky Charms called Pucky Charms, and many more stereotypical references that satirically poke a good humored finger at Canadian culture and pop-culture. To top this satire sundae, the smug Colleens define the very title of the film with their dimwitted sludge and white girl yoga written into every storyboard moment. “Yoga Hosers'” buddy film concept gives an opportunity to two young and clueless teen girls who genre pirate the story with a jalopy of unsystematic plot humor, sucking away and discarding like garbage the sole ounce of blended “Gremlins” and “Puppet Master” cavalier subgenre horror that’s comfortably pleasant and inarguable right for a fun film of this triviality. Though I think the Colleens’ have had their story told, I’m intrigued to see what the pair of aloof teens offer in Smith’s third film of the trilogy, “Moose Jaws.” 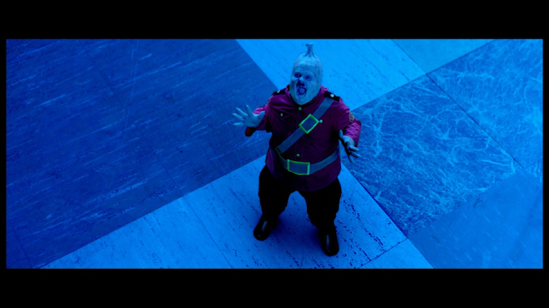 MVDVisual distributes a dual format Blu-ray, DVD, and Digital HD release of the various production companies’, including main investor, Invincible Pictures, and Kevin Smith’s founded SModcast Pictures, “Yoga Hosers.” The Blu-ray disc is a MPEG-2 encoded 1080p transfer with a 2.38:1 presentation and, rarely, flutters under a mediocre bitrate. Image brightens with a glossy coating that revels in brighter hues of blue, pink, orange, and yellow while starker bolds such as red and purple pop with vividness. Yet, sharp details are thin, less defined to bring high definition to present technological age. The English Dolby Digital 5.1 track slightly elevates the ambient noise, especially during the girls’ punk rock practice that muffles out portions of their vocals, yet still manages to vary and balance. The only bonus feature available is a behind-the-scenes featurette that includes some insightful interviews. “Yoga Hosers” oppresses a melancholy reminder that the old Kevin Smith is no more and dawns a Kevin Smith 2.0 who transforms his satirical trademarks and his witty banter into strange misadventures, involving, in this case, two teenage fools flighting from one sub-narrative to another in a mixed bag of comedy and inferior minion horror.