Before being butchered in the woods of a small town, a frightened young woman, Lexie, sends her estranged Uncle Dominic a letter desperately asking for his help. Plagued by his own dark past and a penchant for being hot tempered, Dominic drags his wild, coked up daughter Kendall to his quaint home town which he had long ago abandoned. Most town folk don’t want Dominic snooping around, investigating a town that faces a sinister murder spree under the unmotivated supervision of a perversive and power hungry eye of the local sheriff. Dominic’s anger rages on, fueled by sheer vengeance, as he searches answers for the cause of his niece’s untimely and gruesome death in which three strips of her flesh were torn from her bloodstained thigh, but the closer he gets to the unbearable truth, those closest to him are swallowed by the town’s harboring unimaginable secret and that’s when Dominic’s true violent calling becomes unleashed upon the unsuspecting locals.

Self-described as a “modern, Midwesternized spin on the Giallo,” Jakob Bilinski’s “Three Tears on Bloodstained Flesh” is the writer-director’s comprehensive ode to the multifaceted cult genre. Set on location in Evansville, Indiana, Bilinski unapologetically implores an outrageous white trash horror story that can drop just as many F-bombs and be just as sadistically crude as any Rob Zombie production, but on an indie budget. A budget with unlimited constraints when pinpointing a genre identity as “Three Tears on Bloodstained Flesh” has the word play of a Giallo-like inspired title, even accompanied with masked antagonist armed with a switchblade in a complex plot, but also sharply pivots and dabbles heavily in subgenres such as the revenge thriller, the occult, and torture porn that engages a plot twist, after plot twist, after plot twist up until the very end.

Bill Gobin stars as Dominic and Gobin’s appearance and actions channel very similarly that of Michael Chiklis’ Vic Mackey from F/X’s hit cop drama “The Shield,” but with an important piece of Dominic missing to fully sell the performance. Dominic’s tender melancholy moments of his lost Lexie are to bring out the human side in a cold and stern tough guy, but Gobin lacks that rightful emotion, replacing the tearjerking moments with more of the icy blank stare used in just about ever other scene and to the point where Gobin just might smack his tears back into his tear ducts. Kendall (Kayla Crance) is the constant bittersweet thorn in Dominic’s life as the father and daughter are more like father versus daughter. Crance challenges Gobin very well, even overpowering him in select scenes, protruding a defiant brat without an inkling of remorse until bodies start to really pile high. While Dominic and Kendall are certainly scribed as emotionless mavericks, Stella (Angela Steel) brings us down to a more sensible and realistic character who grieves for her slain daughter with alcohol and depression while also rekindling a once extinguished flame in a surprising twist of events. The best character performance overall goes to Jim Dougherty as the local sheriff who can stand toe-to-toe with Dominic and spitfire insults between Dominic and Sheriff Rex scribed very well for the Indiana University studied actor. Rounding out the cast is Scott Ganyo, Rosalind Rubin, and Grant Niezgodski. 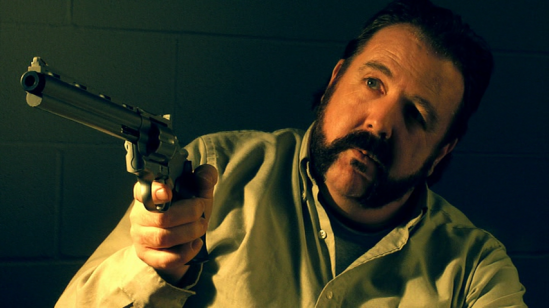 Perhaps a little too ambitious trying to compact a endless frontier, Grand Theft Auto world story into over two hours, clocking in at 142 minute runtime, that feels every minute of it. There’s, perhaps, too much going on here with the potluck genres and plot twists that once the apex of the story has finally been reached, the first acts take on a whole different significance that doesn’t build to the necessary resulting finale that ultimate defines Dominic who, in the beginning, starts off strong, a tough guy who doesn’t take crap from anyone and that’s including his rebellious daughter Kendall, but then flounders just after reaching the small town, interacting passively with his sister Stella and a few townies, to the point where Dominic is just an inquisitive visitor. Dominic’s purpose is the push, push, push the town folk into giving the answers he seeks, like Porter tracking down his share of the stolen money in “Payback;” instead, Dominic’s is the one being pushed to the point of breaking and, finally, then do we see the Dominic’s dark side and his particular skill set in torture and manipulation. 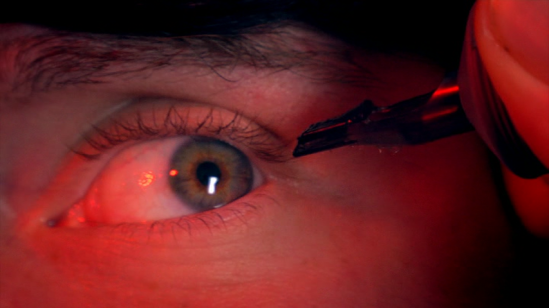 Unearthed Films and MVDVisual presents a not rated 2-disc DVD collector’s edition of Jakob Bilinski’s “Three Tears on Bloodstained Flesh.” The 2014 Cinephreak production is display in widescreen, 1.78:1 aspect ratio, and the image quality above par with a clean picture composited with natural color tones and colorful filters to give some Giallo cinematography charm. The CGI bloodsplatter near the end is, well, CGI, but the run of the scene is fun and brutal that the generated pseudo-blood is used appropriately. The Dolby Digital 5.1 dishes out a well-balanced concoction of ambiance, soundtrack, and dialogue, with the dialogue being clean and clear even during more intense moments. Disc one contains the feature film with option audio commentary by writer-director Jakob Bilinksi and star-producer Bill Gobin. There’s also commentary by Cinematographer DP Bonnell along with Bilinski on the track. Disc two contains even more with a making of piece entitled “Peeling Back the Flesh,” 21 deleted and extended scenes, a gag reel, auditions, and Unearthed Films trailers. Under a stellar presentation within the plentiful content of a 2-disc set from Unearthed Films and MVDVisual, “Three Tears on Bloodstained Flesh” is certainly a “modern, Midwesternized spin on Giallo,” plus much, much more when considering the other genres that might have diluted the foul-mouthed scripted story and left the focus more fuddled, but happens to maintain a fun, semi-gory approach that can’t be argued.