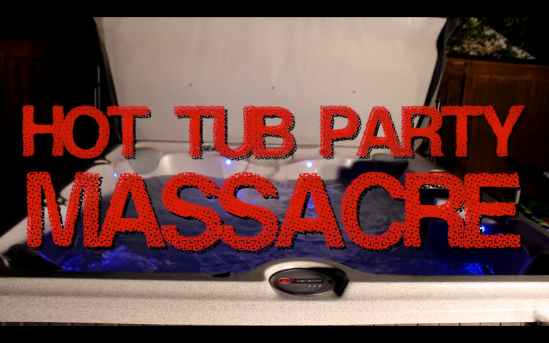 In the midst of a deranged serial killer’s escape from prison, Four Delta Omega sisters enter a school raffle to represent their sorority and end up winning an all expenses paid hotel suite complete with a luxurious hot tub. As student bodies fall in the maniac’s wake, the sisters flight toward fun times before taking notice how many of their friends and fellow students become unfortunate slashed-up victims and just when things are getting wet and carnal, the killer checks in, crashing good times, and making mince meat out of the lucky winners and their boyfriends.

Budget horror filmmaker Chris Greenaway gets his hands into the sisterhood horror genre with his 2016 written and directed tongue-and-cheek horror-comedy “Hot Tub Party Massacre.” Campy. gratuitous. Schlocky. Greenaway has covered all the bases of a satirical slasher sporting a killer wielding a small garden cultivator – “cultivator” is a good title or moniker for another campy slasher as long as you put the proverbial “the” in front of it. Instead, we get the Canadian cult no-so-classic “Hot Tub Party Massacre” because nothing says killer party than an actual killer at your party and here the party is wet and wild with an escaped maniac on the loose, ready to randomly slice and dice the unscrupulous and individualistic sisters of Delta Omega sorority.

While there’s not a sole headliner to Greenaway’s film, like a Jamie Lee Curtis to Laurie Strobe or a Neve Campbell to Scream, the sorority girls attending the bubbly hot tub affair function as a collective headlining mass of alternative women. In alphabetical order, Amanda Nickels, Erin Hyndman, Jynx Vandersteen (“Father’s Day”), and Sarah Foster each represent Delta Omega’s finest in their respective personas as popular, bookworm, party (or slut?), and goth. The quintessential tropes to any routine slasher star as surprisingly benevolent with their upbeat attitudes and gracious acceptance of all kinds of people. When Hyndman’s nerdy Bethany states she probably shouldn’t attend trip, party girl Brandi, aka Vandersteen, counteracts with you’re one of us, a Delta Omega, and only the best become Delta Omegas. Their stalker, the elusive serial killer, is played by Mark Kiazyk trying to do his best Michael Myers impersonation from the chest down, as he’s frequently screened. Kiazyk’s has the look, a face of pure hatred, and I wish that was more prevalent as it’s a face for television. Rounding out the cast are Delta Omega boyfriends Danny Warren and Ken Wright, “Rust’s” Corey Taylor as a school spirited University newscaster, “you’re all doomed” guy Nicholas MacDonald, and the indie scream queen Brinke Stevens making her bit cameo.

“Hot Tub Party Massacre” is essentially one big homage to the enshrined horror flicks and pays it’s respects to, as aforementioned, Halloween with the killer. Also gives a head nod to Friday the 13th Part II in which a couple are jointly impaled in a very similar frame-by-frame sequence. Even one of the official poster concepts is a direct take from “Slumber Party Massacre” and perhaps the Delta Omega is a sign of respect to another Brinke Stevens’ classic, “Die Delta Die!” Greenaway’s “Hot Tub Party Massacre,” by title alone, is not a serious horror film looking to ripoff the foundational slashers, but relishes in a lighthearted satire that begins in a realm of Zuckeresque that loses the visual gag steam at the tail end. The montage of gratuitous nudity of Amanda Nickela, Jynx Vandersteen, and Sarah Foster notch up the “Hot Tub’s” antics in fleshing out the skin craving viewers who can’t get enough of blood and boobs. Awarding this feature as a good film, as a pivotal staple in horror, is an extreme over exaggeration and a poor case of judgement, but consider only chocking “Hot Tub Party Massacre” up to being Chris Greenaway’s ode to the archetype slasher genre.

Ron Bonk and his Sub Rosa Studios, along with MVDVisual, proudly present “Hot Tub Party Massacre” onto DVD that absolutely belongs right in SRS’s arsenal of cheap and outrageous horror. The Full Screen 1.33:1 presentation is what it is, an unmatted sign of low resolution and blotchy, patchy image quality. The 2.0 audio track is a seesaw of fidelity where some aspects of the dialogue are barely audible and then the high pitched shrieks, and their are many shrieks, could pierce ear drums through popping static noise. There wasn’t an expectation of par level video-audio quality, but the due diligence is to publicize, not necessarily criticize, that of the DVD technical contents. The DVD cover is straight out of a photo shoot with a round, thong-cladded booty and long legs very shapely in front of an in ground hot tub. FYI – the hot tub in the movie is above ground and in a hotel. Bonus features include commentary tracks, behind-the-scenes footage (that contains more nudity, by the way), and trailers. Chris Greenaway’s “Hot Tub Party Massacre” has a premise of a short-lived concept that has been run through the kitty-grinder more than once over, but unquestionably is a honoring low-rent tributing spoof of cult classic works that obviously inspired the Canadian horror filmmaker.