Yachtman Georgia Perry aims to be a part of the best of the best by joining a handful of women who’ve sailed around the world. The rules are simple: don’t step on land, don’t let anyone step on your boat, and don’t turn on your outboard motor. As Perry heads out into the open ocean, the 25-year-old carries with her a burden of lifetime baggage stemming from her mother’s acute depression and gruesome suicide, her father’s accident and deteriorating health, and the bond between her and her boyfriend Luke coming unraveled. Combine all that weight with complete isolation, loneliness, and no wind to push her sails, Georgia quickly spirals downward into a turbulent state with her only traveling companion being her cat with whom she has conversations on her becalmed sloop. All her fears come to fruition, blurring the line between reality and disturbing fantasy that threatens her voyage and, maybe, even her life.

Bayside Pictures presents “Visitors,” the last helmed feature by the late Richard Franklin of “Psycho II” and “F/X2” fame. “Razorback” writer Everett De Roche penned the 2003 psychological thriller and is able to conjure out some wicked mind buckling material of a woman subjected to cabin fever in the form of a volatile, non-linear story. Franklin adds his two-cent charm with impressive visual sets and effects from the early turn of the century, implementing CGI where appropriate, being practical when deemed, and, by golly, the effects resulted didn’t come out too shabby. The ocean has always been beautiful, yet terrifying mystery that has yet to be fully explored, and Franklin’s able to capture the ominous anomaly that associates with the deep blue sea under an overwhelming guise of mental health and severe isolated confinement. 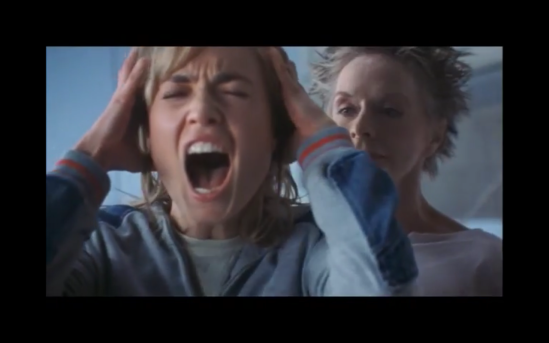 Before she wandered into “Silent Hill,” but after becoming forsaken in “Pitch Black,” Radha Mitchell showed strength in solitary by playing the headstrong, nautically ambitious sailor, Georgia Perry. Mitchell, who was slightly older than her 25-year-old character, fabricates a troubled young woman willing to risk it all, even her life, even if it meant to leave to escape all her woes and that she holds dear at home. The “Rogue” and “The Crazies” remake actress from Melbourne has a sensationalized and systematic dynamic with her on-screen mother, played by the late Susannah York, in what’s considered to be a disturbing role of manipulative motherhood that forced Georgia to be extremely close and clingy to her endearing father, an underrated role bestowed upon Ray Barrett. A young and upcoming Dominic Purcell (“Blade: Trinity” and “Primeval”) costars as Georgia’s lover and business manager who may or may not have other underlying intentions with Georgia’s sponsors. Appearing never together and putting Mitchell at the epicenter of their lives, the foursome played their roles beautifully by stretching the limits of reality without being overly absurd to the point of being unbecoming of a thriller.

By no means is “Visitors” a woman versus nature premise. Yes, Georgia faces any elements that would plague any sailor who ventured into the ocean alone, but nature was only accessorial. “Visitors,” for the sake of being funny, is more of a film about a young girl embarking on a journey of self discovery. Georgia must get away from negativity that has been eating at her zealous spirit ever since the terrible childhood accident that had crippled her father and destroyed her parents’ marriage. Her embattled mother’s constant belittling, berating, and blaming is the brunt of that that has been burdening. At sea, Georgia battles her onshore demons, which also includes her father’s failing health and her failing relationship with Luke, and coinciding is her ever present looming and underlying fears that lurk out into manifestation, or a visitation if you will, during severe cabin fever. The trip around the world won’t kill her, but her inner demons just might which begs the question if “Visitors” is more of a mental health film and the answer is a firm yes without salty doubt.

Umbrella Entertainment releases “Visitors” onto a region 4 home entertainment DVD. The DVD is beyond an upgrade from it’s region 1 counterpart in the image and audio departments. The anamorphic widescreen, 2.35:1 aspect ratio, renders a cleaner image with slightly more natural color tone as well as offering more film flesh on either side from the 35mm negative. The English Dolby 5.1 audio track offers a range of diversity. The dialogue is clear and fine, the ambient track syncs with ample depth, and the brooding and perilous soundtrack from composer Nerida Tyson-Chew (“Anacondas: The Hunt for the Blood Orchid”) provides a delectable varied score to Georgia’s though process. The extras are thin, not much different from the Stateside release, including a photo gallery, cast and crew bios, and the Palace Film’s theatrical trailer. Considered widely as an Australian ozploitation film, “Visitors” is deep-seeded, mental trench warfare on the high seas set on a course of psychological doom. A fine film for being Richard Franklin’s last hurrah.