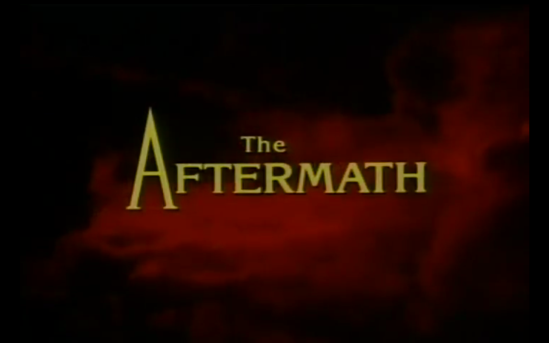 On the space shuttle Nautilus, three astronauts are returning home after one year in deep space. Their outbound transmissions to Earth are not being returned nor are they being received and as their ship draws closer to Earth, the only option for reentry is to take a risky crash landing into the Pacific Ocean, just off the coast of California, hoping someone, anyone, would see their shuttle coursing downward from the sky. Only two survive the crash and swim to shore where no boats, no planes, nor onlookers were around to receive them. They soon find out why. World War III had engulfed much of the Earth during their time in space, reaping the land of the urban jungles and making food and living conditions scare. Germ warfare had mutated much of the population to cannibalistic creatures and when torrentially raining, acid rain pours from the war torn atmosphere from ferociously brilliant and deadly clouds. Only a small band of good people remain and the two astronauts seek to keep them safe from the harsh elements, even against a merciless gang of thugs.

In the early 1980s, an ambitious and visionary filmmaker sought to produce, write, direct, and star in his very own modest budget feature film that would rival Hollywood’s glamourous and expensive effects while still maintaining a down-to-Earth independent production. That filmmaker was none other than Steve Barkett, creating his debut film, the 1982 science fiction post-war catastrophe, “The Aftermath.” “The Aftermath” is like if the “Planet of the Apes” met “The Walking Dead,” a sheer blunt for trauma of returning to your home to discover the world in shambles with different factions of hard nose killers ready to plunder all that you own and all that you will ever have. Barkett, with assistance from the brothers Dennis and Robert Skotak, who’ve went on to work on major studio films such as “Aliens” and did the matte work for John Carpenter’s “Escape from New York,” create a destroyed Los Angeles landscape through the power of some serious movie magic considering the time period and the budget.

Steve Barkett is Newman, one of the three astronauts with no first name, and the tough hombre’s hard disposition comes from his background exposition where he lost his wife and child before going up into space. Newman’s cold, but not heartless, and Barkett taps into that fairly well despite some robotic and formulaic performances. However, Christopher Barkett, Steve’s son, was a complete first generation cyborg, a regular toaster oven with teeth and eyeballs that monotones through all the lines and actions. The most interesting casting here is Lynne Margulies, who at the time of this release, was or was not yet the late Andy Kaufman’s girlfriend. Margulies, who previous worked on an adult film entitled “Young, Hot ‘n Nasty Teenage Cruisers,” continued the racy trend with a shirt-pokey role in Sarah, Newman’s quick-to-sack love interest with a briefly, well-endowed nude scene. Yet, Sig Haig manages to steal the Barkett’s film from right under his nose. The young and ruggedly muscular “The Devil’s Rejects” star sports his trademark shaved head and thick, dark goatee, labeling him the perfect casting choice in gang leader Cutter. Alfie Martin, Forrest J. Ackerman (“Dead Alive”), Larry Latham, Linda Stiegler, and Steve’s young daughter, Laura Anne Barkett costar.

One aspect that’s really appreciated in Barkett’s enterprising venture through post-war commentary and morally righteous themes is the special effects matte work from the Skotak brothers. Detailed paintings, such as exampled in the war-ravaged metropolis that was formerly L.A. embodying the once towering buildings, are now destructively cut short in a mangled heap in a matte effect with live actors. Practical effects work wonders for Barkett’s large scale premise despite the small scale performances, except from Sid Haig. The detail in the violence dawns a newly restored faith in early 1980’s sci-fi films; violence that was more prevalent in the genre later in the decade, in such films as “Aliens” or “Robocop,” making Barkett’s film a trail blazer that paved the way to deliver more sensational savagery and lots of blood of a high body count to a already fantastic genre.

MVDVisual and VCI Entertainment release Steve Barkett’s “The Aftermath” onto a dual format, DVD and Blu-ray, combo pack. Presented in 1080p on a MPEG-4 AVC encoded BD-50, the post apocalypse never looked so good in a widescreen 1.78:1 aspect ratio from a 2K remastered transfer of the original 35mm negative. VCI has bested the rest with colorfully enriched scenes and untouched framing. Slight grain more so over the matte special effects that optically contrasts between the two different layers where a little touchup could have smoothed out the indifferences, but other than that, the details are quite stark. The clean and untarnished English LCPM 2.0 mono track is also vastly well constructed that contains minuscule hissing and the occasion pop, clearly making the dialogue a prevalent force. Composer John Morgan’s traumatically dramatic score is full-bodied and robust that coinciding renders well with the action sequences and tranquil moments. The extras offer the original laserdisc bonus material that provide snippets of interviews from cast and crew, Steve Barkett’s short film “Night Caller,” over an hours’ worth of John Morgan’s soundtrack complete with title information, VCI promo announcement for Barkett’s other director “Empire of the Dark, and the original theatrical trailer. A retrospective journey to the early 1980’s science fiction indie sector is also a visually stunning resurrection of “The Aftermath” courtesy of VCI Entertainment and with impressive effects and a bigger-than-life concept despite an underwhelming performance as an actor, director Steve Barkett’s legacy as a filmmaker remains stronger than ever with this prominent and well-deserved upgrade of the lazer-gun and mutant inhibiting world reckoning.

The Aftermath available at Amazon.com!