A Massachusetts foursome of girls, Wren, Chloe, Hallie, and Katie, invoke the summoning of an internet lore named Slender Man after watching an instructional online video on how to evoke his presence to reality. After the video completes and the girls dismissively chalk this activity up as hoax-filled rubbish, an embattled and disconnected Katie vanishes a few weeks later during a school sanctioned field trip to a historical graveyard, thrusting the remaining three friends into investigating her abrupt disappearance all the while they each experience an ominous figure haunting them in and out of consciousness. As the continue to look for Katie, Slender Man keeps popping up into the findings. Wren’s convinced, after suffering from terrifying visions, that Slender Man wants the four who’ve contacted him and when her friends dismiss Wren’s frantic ravings, she employs Hallie’s sister, Lizzie, to assist in stopping Slender Man. All of reality is being skewed while Slender Man hunts them down one-by-one and if they’re not taken, those left in Slender Man’s wake will forever be deranged with madness.

Straight from it’s internet meme playbook origins comes the constructed next chapter in “Slender Man’s” mythology from the “I’ll Always Know What You Did Last Summer” director Sylvain White and written by David Birke (“Elle”) that feels very familiar to “The Ring” premise. Based of the mythos created by Victor Surge, aka Eric Knudsen, “Slender Man” fruition onto the Hollywood scene finds a home under Sony’s Screen Gems division, the same division that delivered the Paul W.S. Anderson “Resident Evil” franchise. While not a mega-glossy action horror piece for Sony and Screen Gems, White’s take on one of the internet’s most popular and mysterious spawns revels in it’s own crowd funded supernatural element and White is the grand puppeteer behind the scenes piecing the material together that builds upon, and extends, “Slender Man” canon into film and video visuals. “Slender Man” provides the character flesh, extenuating doubt where special effects can make monolith his presence of inception and flourish from imagination to terrifying reality. If looking outside the box, “Slender Man” could also be translated into symbolism for the online predatory habits men take towards young, sometimes teenage and impressionable girls. There in lies references to this notion with such in Katie, who is a runaway teenage girl with a fixation toward an obscured man from the internet, aka Slender Man, and also Hallie’s vivid nightmares of being pregnant with the very Lovecraftian-esque spawn of Slender Man as tentacles shoot out from her large, protruding stomach. Yes, she’s a high school girl… 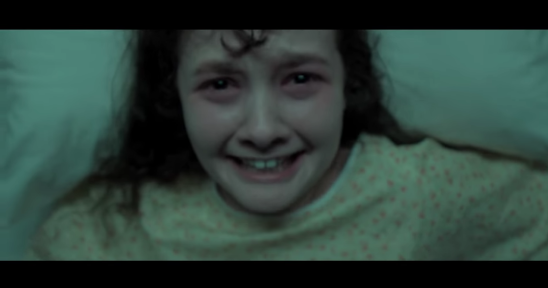 “Slender Man” centers around a four female, high school age characters: Chloe, Katie, Wren, and Hallie. The latter being the leader, Hallie, played by Julie Goldani Telles, is an unwavering non-believer of Slender Man, contributing her visions and feelings as some sort of coming of age Freudian bizarro show. The now 23-year old Telles convinces to pull off a well adjusted teenage girl spiraling into Slender Man’s otherworldly oblivion and absolutely turns the corner when younger sister Lizzie, Taylor Richardson, becomes an unwitting participate. Hallie almost comes toe-to-toe with her confident and frantic friend Wren, a character bestowed to Joey King of “Quarantine” and “White House Down.” King’s townboy-ish approach has served well to keep her character apart in order to not clash with other warring personalities. Yet, there’s not a whole lot interesting aspects associated with the other two characters, Chloe and Katie. If audiences were expected to be concerned for Katie, then Annalise Basso needed her character to have more screen time. The “Ouija: Origin of Evil” actress barely had a handful scenes to try to convey a poignant life with an alcoholic father before she’s whisked away to never been seen again. Chloe had a slight more substance as means to exhibit the result of not being taken by Slender Man; “Chilling Adventures of Sabrina’s” Jaz Sinclair didn’t really add any pizzaz to her poorly written flat character.

Though Slender Man’s origins surpasses being a byproduct of an internet meme and becomes woven into a lore of all it’s own through a global, technological network, the very fabric “Slender Man’s” tech horror theme had laid a negligent foundation. Viewers without a hint of Slender Man knowledge will find the connection between the shadowy figure that stalks and kidnaps children and the domain from which it was born, witnessing the technology used in the film being wielded as a tool of evil rather than a conduit of to connect two worlds. What works for Sylvain White is his knack for shaping Slender Man into physicality in an applauding effort that combines chilling atmospherics, well timed visual and audio cues, above decent special effects, and the crunchy, contorted body of Javier Botet as the Slender Man. We’ve covered Botet before in “Insidious: The Last Key” as the antagonistic KeyFace creature. KeyFace and Slender Man, two similar but still vastly different villains, wouldn’t be as influential or be brought to such a horrifying fruition if Botet was not behind the mask and it’s because of Botet’s blessing, but also a curse, Marfan Syndrome physique that he’s able to accomplish a wide range of distorted and malformed characters.

Sony Pictures presents “Slender Man” onto HD 1080p Blu-ray under the Screen Gems label. The Blu-ray is presented in widescreen of the film’s original aspect ratio, 2.39:1. “Slender Man” doesn’t sell itself as high performance, resulting in more details in the range of textures rather than relying on a clean, finished look. Colors are remain behind a cloak of darker shades to pull of gloomy atmospherics, but do brighten when the scene calls for it. The digital film looks great, if not fairly standard, for movies of today. The English DTS-HD Master Audio 5.1 track is quite high performance, like revving an engine on an imported roadster. Slender Man comes with his own cache of audio tinglers to send chills up your spin and invoke cold sweats. Every branch breaking ambiance and desperate and exasperated breath being took by the teen girls aligns cleanly and nicely with the visual representations. Dialogue is lossless and prevalent as well as being integrated seamlessly during more active sequences in a well balanced fit all with range and depth. Thin extras do put a damper on the release with a bland featurette entitled “Summoning ‘Slender Man:’ Meet the Cast.” The featurette doesn’t do much more than give the actors’ and White’s opinion of their characters and Slender Man. The shame of it is that the internet is a vast place of information and knowledge and, yet, the featurette doesn’t knick the surface of who and what is Slender Man. Plus, if remembering correctly, there are scenes omitted from this release; more intense and bloodshed scenes that would have granted a more adult friendly rating. This release doesn’t offer up two versions of the film. Despite embodying a rehashed, bi-annual story of supernatural and psychological tech horror of the PG-13 variety, “Slender Man” endures through with a sliver of appreciation for the easily missed facets that work as a positive in Sylvain White’s 2018 film, such as bleak atmospheric qualities and Javier Botet’s performance, but the diluted final product, released on Blu-ray, benches what could have an at home video entertainment home run for Sony Pictures.