After the untimely death of her mother, Linda returns from her university studies to reacquaint herself with the inherited Montclare, a home for the elderly her mother owned and operated through the decades as a family business. As she internally debates about whether to sell the grand, yet antiquated estate, 24-year-old Linda shuffles through her mother’s left behind things that rekindle Linda’s faded memories of her youth and add a sense of melancholy about her mother’s mental condition. A seemingly quiet, if not quirky, home for the elderly quickly becomes shrouded with mystery after the discovery of one of the residents found dead in a bathtub. Soon after, Linda feels as if she’s being watched and toyed with inside the corridors of Montclare: candles found lit, bathroom fixtures overflowing and cascading with water, mysterious figures looming from inside her room’s window, and her mother’s belongings sprawled out about the room. Paranoia sets into Linda as she suspects the resident caretaker and doctor of a lethal plot against her inside an old, foreboding manor that troubled her mother into deathly consequences and she searches for answers inside her mother’s extensive diaries that reveal the ominous dread that overwhelmed her inside an evil house.

“Next of Kin” is Australian’s answer to Dario Argento’s hauntingly apprehensive and vividly hued classic, “Suspiria.” Directed by Tony Williams and co-written with Michael Heath (“Death Warmed Over”), “Next of Kin” embodies monolithic brooding merits of a gracefully shaped horror and palpitating anxiety unlike any other Australian horror film we’ve ever seen before. In fact, Williams 1982 film doesn’t feel very Australian at all that’s set chiefly in and around Montclar, a lavishly gothic estate with expensive fountains and floral garnishes. Aside from native accent and barely a dusty road to drive down, the country of origin could be anywhere, punching home the aspect that the incident at Montclar is universal. Looking into a couple of their techniques, Williams and cinematographer Gary Hansen (“Image of Death”) utilize slow motion and interlaced scenes to convey a surreal dread that transcends from film to senses, also involving disruptive audio cues and visual jump scares, to culminate every scene, ever moment, into a well thought out result on how to effectively reach out and affect that scared little boy or girl in all of us. 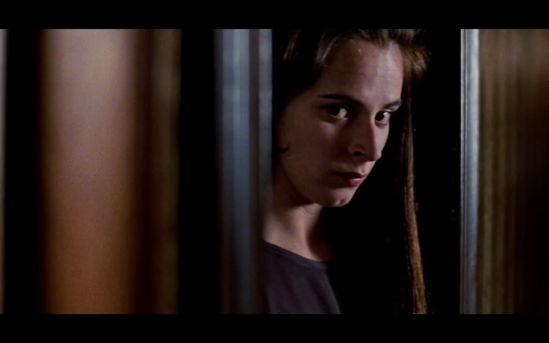 Primarily a television and mini-series actress, Jacki Kerin sets foot into the main actress Linda. Kerin’s able to flip emotions from emitting a passive quality while she seemingly annoyed by her mother’s death while switching gears into a hyper-tensive defender. The small screen actress translate well onto the big screen, accompanying well versed thespians in “Picnic at Hanging Rock’s” John Jarratt, who went onto to more notably the “Wolf Creek” franchise. There’s also Alex Scott (“The Abominable Dr. Phibes”) and Tasmanian-born actress Gerda Nicholson. Scott and Nicholson do a fine job of portraying un-trust worthy snoops with underlining knowledge yet to be exposed and with Kerin, the fear goes unopposed and spreads like wild fire. the remaining cast includes Charles McCallum, Bernadette Gibson, Robert Ratti, Vince Deltito, and Debra Lawrence.

Practical effects are minimal in “Next of Kin,” but are well integrated with a meticulous purpose. Williams maintains the gore to an infancy amount, but the New Zealand born director doesn’t nickel-and-dime the macabre. Much of the death displayed comes in at post-humorous, visually positioning the cold and blue hued, more at times ripped life from, bodies to vessel the story forward toward a shocking, what-the-hell, and oh glorious climax. Then, when all the proverbial cards on the table, Linda finds herself ensnared in a cat-and-mouse game where Chris Murray’s practical effects come to the forefront. Special effects maestro, Chris Murray, had the George Miller experience while working on “Max Max” in 1979, prepping him to be the adequate effects artist to create surreal and, also, brutal Giallo-like murder.

Umbrella Entertainment presents Tony Williams’ “Next of Kin” onto a region free, full HD 1080p Blu-ray home video. An Ozploitation classic in itself, Umbrella Entertainment puts the film on a home media pedestal with a remastered 4k transfer from the original 35mm interpostive and presented in a widescreen, 1.77:1 aspect ratio. Beyond gorgeous with lush grim colors and able to keep the natural grain of the 35mm nitrate, “Next of Kin” sees one hell of an upgrade that shows no wear in the transfer and no compression issues or edging enhancements. Even with the heavy blue tint at time, the amount and the use is appropriate alongside Gary Hansen’s vision. The new English DTS-HD master audio emphasizes the heavy synthesized score by German electronic music composer Klaus Schulze that meshes fine with the creepy house ambiance. Dialogue is properly forefront and crystal clear. Special features run amok with audio commentaries with director Tony Williams, producer Tom White, and with cast members John Jarrett, Jackie Kerin, Robert Rattie. Also on the release is a “Return to Montclar – Next of Kin” shooting locations revisited, extended interviews from “Not Quite Hollywood” director Mark Hartley, deleted scenes, original and VHS trailer, German opening credits and trailer, an image gallery, and a couple of Tony Williams’ short films: “The Day We Landed on the Most Perfect Planet in the Universe” and “Getting Together.” “Next of Kin” has a brawny Italian Giallo flavor with a gritty, distinctive core of Australian horror filmmaking; sheerly beautiful and indisputably morbid, director Tony Williams has garnished a choice horror favorite that’s been sorely passed over through the years.