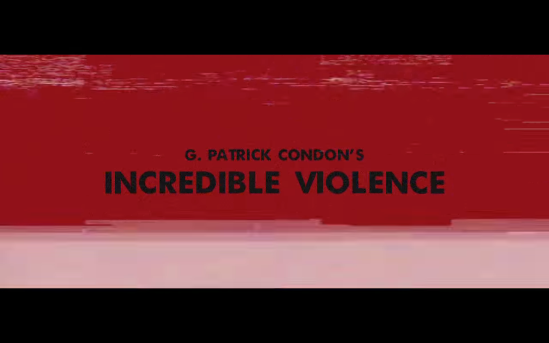 After squandering a shady investment group’s money, a struggling filmmaker stages a last attempt effort in writing and directing an all-out and profitable horror movie. Isolated on a stretch of private land sits a house which his movie will be set. The director installs camera monitors, archaic printers in each room, and fashions a room for himself in the confining attic space, turning the house into a platform for five young actors to perform at his instructional, omnipotent influence without having to ever personally interact with the actors, a group he strongly loathes. His despise for actors and the financial pickle he finds himself in with shark investors places him at the centerpiece of his slasher film as the masked killer. With the stage set and the actors all in place, the directing maestro helms unsuspecting actors to their violent deaths in the name of art, self-preservation, and actor genocide. 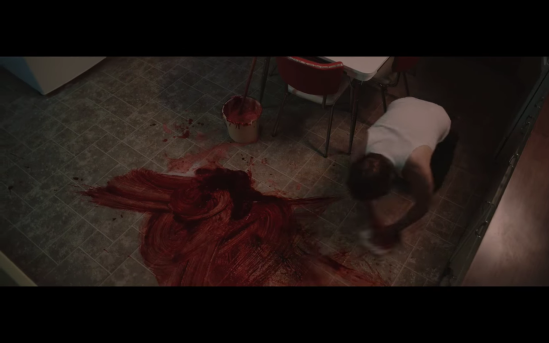 As a film that turns the slasher mythology on its head, G. Patrick Condon’s “Incredible Violence” is a serrated vision of bleak, dark comedy too sharp to really fully digest and that’s okay. Filmed in Canada of 2018 and released this year on SVOD from The Hunting Party Inc., production studio, “Incredible Violence” strays away from the young, naive victims points of perspective and opens the path up for a nihilistic killer to control the narrative around his desperate motives. Though having complete control over most of the factors and planning ahead of time, “Incredible Violence,” as a partial comedy, folds miscreant mishaps and caricatured flaws on top of, indeed, incredible violence and while that vehemence is focused primarily on actors as a while, a good portion pivots and breaks down even further to the individual level that can be personal and can be insensitive for women who have to best themselves, sometimes together and sometimes separately, against two different antagonistic foes of the opposite sex. 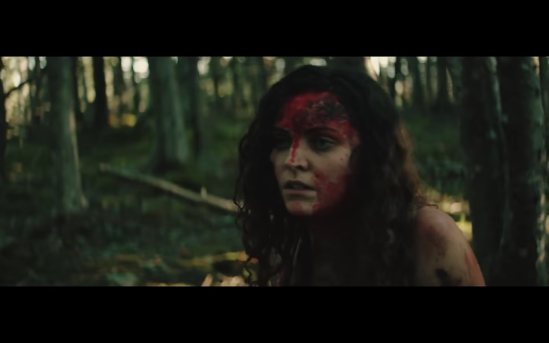 The largely based Canadian cast begins with Stephen Oates playing the hack director and self-imposed killer, named after director G. Patrick Condon, of the titular film and though that might seem egotistical of the Condon, enough humiliation smothers the self-assuring and struggling character to the point of utter satire with even going as far as poking fun at his last name in a brief quip of dialogue. Oates, who has starred alongside Jason Mamoa on the historical Canadian action Netflix series, “Frontier,” is an intriguingly no-shame filmmaker who hustles together a plan schemed to save his life. Sporting a wife beater, long fur coat, and an unadorned mask, Oates exhibits Condon perfectly as a hack artist in filmmaking and in being a badass serial killer. Then there’s Grace, the lead character bound for stardom as an untrained actor taking a role in, what she considers, a performance art film and naively goes into the project with such gusto that she blatantly ignores all warning flags from the beginning, a role very well suited by the striking eyes of M.J. Kehler. Grace endures shots left and right, from friends and foes alike, as a hopeful artist, but like “Incredible Violence” shows, a true inclination comes out of people when push comes to shove and Grace, through Kahler’s physical bombarding of a final girl trope, doesn’t need acting school or any other doubters to trump her will, passion, and ferocity. One scene to note is between Foster, Kahler, and Kimberly Drake and Kahler’s Grace is just stricken by fear over being ask to kill someone, she’s screaming and is essentially rooted to her spot. The moment is grippy and terrible empathetic to know that true fear does freeze one’s fundamental functions of survival and of morality. “Incredible Violence” co-stars Michael Wotherman, Kimberly Drake, Erin Mick, Meghan Hancock, and Allison Moira Kelly.

“Incredible Violence” bursts with a talented cast with deserving of a curtain call performances and lives up to the title with incredible, if not whole heartily gratuitous, violence and some brief macabre nudity, but Condon’s story has a lot of zeal that doesn’t properly switch tracks when characters break under their obscure tormentor’s direction. Condon, the director, builds the tension more through the repetition of violence with a slight tweak every time rather than crafting a breaking point, a catalyst that dissembles sanity and refigures patchwork insanity, making characters alliances difficult to place that ultimately crumbles the dynamics into just a bunch of people beating each other to a pulp. The same kind pivoting told differently can be said about the strange, public television show Celebrity Autopsy paralleling as intra-story that often feels disconnected to Oates and his film. I guess with a film entitled “Incredible Violence,” a substance merit to the narrative would be a long shot, but as an exploitive, self-described meta-horror centerpiece, “Incredible Violence” is made up of all sorts of gut-checking goodness with torture, madness, and cynicism helmed by sadism without the presence of slasher-esque, blank evil.

1091 Films, in partnership with G. Patrick Condon’s The Hunting Party Inc., presents “Incredible Violence” that runs 89 minutes onto a plethora of media streaming platforms, such as Amazon Instant Video, iTunes, Google Play and Vudu, and on-demand cable services. Unfortunately, “Incredible Violence” is a streaming only feature so image and audio qualities will vary across streaming devices. There were also no bonus material or special features present, but as an extra tidbit about production, the film took approx. 2 years to complete with the unpleasant misfortunate of one of the original cast members passed away during rehearsal. This forced the script to be re-written, delayed, and ultimately triggered G. Patrick Condon to write himself, as a character, into the script. Futhurmore, the cast and crew had agreed to stay in the house set location until filming wrapped which resulted in some actual anxiety and stress to spill out into the performances. Contextually sound in the confines of violence, “Incredible Violence” finds footing staggering abroad the cascading carnage of horror-comedy with a single character arch involving making it big in the acting world only to just make it out alive and in one piece of this film.