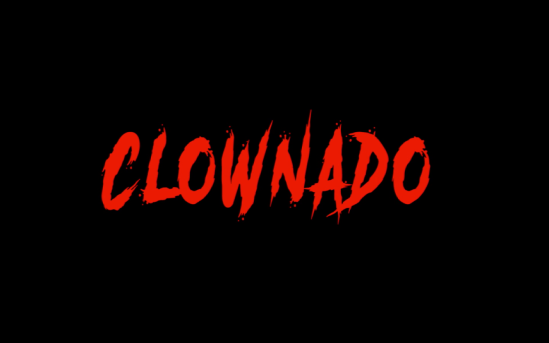 A sadistic carny ringmaster and his troupe of malicious clowns put on a traveling circus act through the America midwest. When an unfaithful lover challenges the powerful lout, he and his painted-face company exact a punitive act against her for all the crowd to see and enjoy and in bitter return, the scorned woman invokes a witch’s spell to summons evil forces to pluck the ringmaster and his clown lackeys up into an unordinary whirlwind. Trapped inside a super storm, the clowns use their newfound and unintentional given powers to funnel a tornado for spreading massive destruction through their cyclonic path of vengeance, terrifying a handful of ensemble midwestern survivors to fight back against the merciless and murderous clowns. 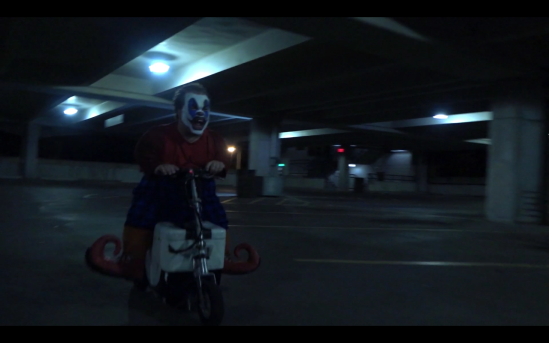 Clowns are so hot right now. From the success of Stephen King’s “It” remake and the subsequent sequel to the re-emergence of Batman’s notorious foe, “Joker”, in a controversial origin film, the carnivalesque buffoons are at the height of their inhuman malevolency since the late 1980’s saw Jack Nicholson donned the makeup as a crazed lunatic with a penchant for nerve gas and extraterrestrial clowns invaded Earth to harvest people and snack on their blood. Adding director Todd Sheets into this era of clown renaissance and outcomes the carny carnage gore fest, “Clownado,” straight from the big top. As an obvious pun on the “Sharknado” franchise, the “Dreaming Purple Neon” and “Sorority Babes in the Dance-A-Thon of Death” director pens and helms another blood drenched, apocalyptic, cine-schlock of callous proportions and unparalleled in content funded by Sheet’s production company, Extreme Entertainment. With a production company tagline of Movies with Guts, Sheets makes good on his delivery with an up close and personal spew of geysering blood sprays, severed gushing limbs, and guts, lots of guts, that’ll run any clown’s makeup red while dousing each feature with action and fun. 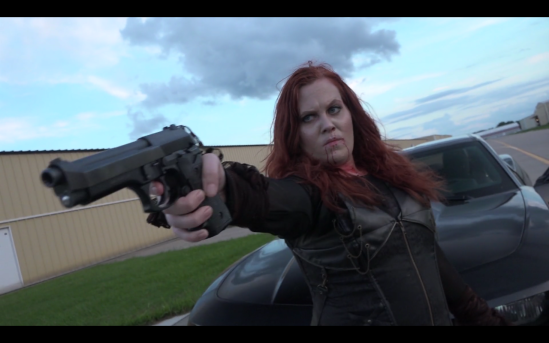 How do you hire a cast to garb themselves as maniacal clowns, have them portray being supernaturally charged with meteorological phenomena, and wreak havoc down from the heavens with a tornado vessel just to rip people to shreds all the while laughing their heads off? Easy. You employ the entourage familiar with your brand of Mccobb! John O’Hara, Antwoine Steele, Dilynn Fawn Harvey, Rachel Lagen, Jeremy Todd, Millie Milan, Nate Karny Cole, Douglas Epps, and others have worked previously with Sheets in these flicks, but not limited to: “Sleepless Nights,” “Dreaming Purple Neon”,” “Bonehill Road,” and “House of Forbidden Secrets.” Mix to blend some well churned budget horror talent, such as “Return of the Living Dead’s” Linea Quigley as an angst-y bar/strip club owner and “Brainjacked’s” Joel D. Wynkoop as a fearless flyboy, an already colossal cast becomes an gargantuan cogency of tacit talent and to top it off, how about an former porn star amputee? Jeanne Silver, or better known in the industry as Long Jeanne Silver of “Debbie Does Dallas Part II”, bewitches the screen as the spellbound caster and she didn’t even have to penetrate anyone with your missing fibula of a leg. The one actor that really sought the affable nature in us all is Bobby Westrick with the charming redneck Hunter Fedelis. Westrick, who hasn’t been in a movie since Todd Sheets’ “Goblin” back in 1993, returns in 2019 to be one-time alcoholic lowlife to a world savior from clown devastation; Hunter’s an overall gentlemen despite his straggly, rough appearance and beat up old straw cowboy hat and doesn’t live one person behind while also befriend a black man impersonating Elvis Presley in town has unexpressed racial prejudice. The cast also includes Sierra Stodden, Eileen Dietz, and a Cayt Feinics who seemed to just love caressing her blood soused breasts more than the next woman. 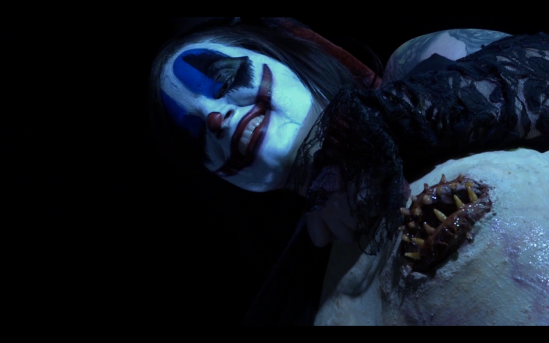 I get what Todd Sheets has erected here being the ringmaster of a dementedly dissension in the circus of blood. The capitalizing idea of clowns twirling and terrorizing through a maelstrom flash of fluorescent, like of SyFy sharks in that popular six installment franchise, is indie kitschiness at it’s finest and couldn’t be more perfectly timed after the release of Joaquin Phoenix’s “Joker.” “Clownado” is a fun windstorm of gore and carnival surrealism. Sheets continues to deliver as promised per his production company and is still able to sustain relationships with his usual clowns – such as my stoic favorite, Antwoine Steele, and his role dressed arbitrarily as the King of Rock and Roll – while providing chuckles, sparks, and bimbos galore and, no, I don’t mean clown names. With any Todd Sheets production, the practical effects are innovative and dastardly with highlights including breasts with teeth instead of nipples, heart replacement surgery with a block of ice, and head explosions! 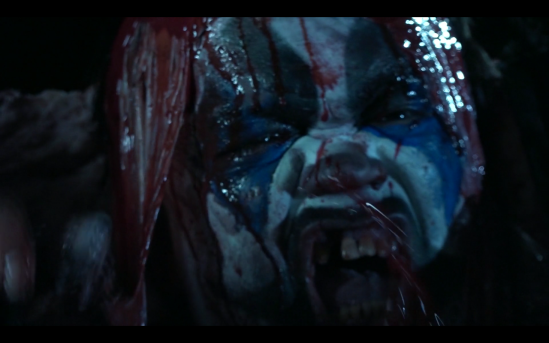 MVDVisual and Wild Eye Releasing doesn’t clown around with Todd Sheets’ “Clownado” that lands onto DVD home video in a widescreen, 1.78:1 aspect ratio. In light of microbudget limits, the digitally shot film has some issues, such as color banding, and then there’s also the visual effects that come straight out of the stock footage file and then matted over with assertion on the first run; however, Todd Sheets been doing this for decades and I’m sure if the director wanted his production and post-production to be first rate, he’d be like Picard and make it so. Yet, disappointments are a part of life and the biggest disappointment by far is the over saturation of purple tint to lay down an ominous killer vibe throughout the night scenes of the 99minute run and the tint completely dilutes the vivid face paint, or in the clowns’ case war paint, and also turns blood into a black and magenta farcical gas. The English language audio 2.0 stereo track, complete with closed captioning available, has great clarity and often doesn’t seem as tumultuous as would be expected. The mic had on point placement to hone in on every wisecrack and pun known to clown-kind. Bonus features include a commentary track with Todd Sheets, behind the scenes, a featurette entitled “The Human Hurricane, and Wild Eye Releasing trailers. From a meteorologist standpoint, weathering through “Clownado” might be a downpour of rubbish, but for those who live vicariously through Todd Sheets’ repertoire of campy, no-budget, gore films, “Clownado” is a beautiful black-comedy day for a stroll.