A pledge group of amateur, hippie Satanists on a LSD-induced drug trip have their nationwide havoc reeking voyage come to a screeching halt when their dilapidated van breaks down at an equally dilapidated small quarry town with an isolated population of 40 residents. Squatting in a vacant hotel, Horace, the clique’s leader, dangerously lets his followers indulge in their whims while under the powerful hallucinogen. Their brutal run in with a local girl causes a stir of attempted reprisal amongst the girl’s family, especially with her grandfather who aims to remove the hippies from the area, but when the elderly man is beaten up and given the a taste of LSD, a whole new can of meat pies is opened up! Looking for retaliation for his grandfather’s battering, the grandson withdraws blood from a rabid dog he killed earlier in the day and spikes the town bakery’s meat pies that were to be specifically purchased by Horace’s gang. The combination of rabies and LSD turns the deranged Satanist into foaming at the mouth and infectious killing machines set loose amid the town’s 40 person population.

Let it be known that Satan was an acidhead. That shocking phrase serves as a prelude of the horrible acts to come in David Durston’s “I Drink Your Blood.” The 1970 Jerry Gross produced exploitation and infected horror video nasty, notoriously labeled an X rating solely for the graphic violence, is a quintessential staple of Americana horror. Shot in upstate New York and based off true, and disturbing, events, Durston’s written and directed feature is a horrific tale harnessing every unspeakable evil in the unholy book: rape, drugs, murder, abortion, promiscuity, cannibalism and even touches a little upon racism. Durston flaunts a scattered-brain and raw edit that fluently rides along with the script’s crazed atrocities.

“I Drink Your Blood” never cashes in on one headlining actor to fulfill a star lead; instead, calculated characters fill the void where needed, an endearing homage attested by the structures invested by George Romero who used a similar blueprint for his pioneering, black and white horror classic “Night of the Living Dead.” Bhaskar, aka Bhaskar Roy Chowdhury, tops the credit list. The India born actor stars as the sadistic Satanist leader Horace, one of the handful of ethnic roles whose character background mingles more on the Native American side. Every so often, Bhaskar’s native accent filters through, but the actor’s devilishly brilliant performance reassures a radically raw and physical undertaking that forgiveness for such a small concern is automatically defensible. Other prominent roles were awarded to John Damon (“Blue Sextet”), George Patterson (“God Told Me To”), Rhonda Fultz, Arlene Farber (“The French Connection”), Iris Brooks, Richard Bowler, and a young Riley Mills has the rabies-revenger Peter Banner. However, another cast member, in a minor, less dialogue role, has overshadowed many of her costars in light of her legacy since then. Lynn Lowry, known for her role in George A. Romero’s “The Crazies” and more recently in Debbie Rochon’s directed exploitation film “Model Hunger” that was reviewed here at Its Bloggin’ Evil, plays a mute hippie turned rabid killer in a memorable video nasty-warranted scene involving a, then, antique electric knife, like the ones you plug into the wall.

In the glory of “I Drink Your Blood’s” sickest and most stunning special effects that include the poignantly severed limbs and heads of likable characters, a synthesizing score also gnaws at your gut-riddled nerves. During intense moments, harmless butterflies fluttering against your stomach’s inner layer, tickling your core’s coy innocence, violently alter through a bone-chilling metamorphosis, evolving into gut-busting vampire bats with razor sharp talons and flesh ripping fangs. Your whole whitewashed body will clench during Clay Pitt’s one of a kind visceral score, pitched in an ear piercing vortex during high anxiety segments such as when a diseased oppressed Horace and a shaken dam worker are toe-to-toe in a deadly standoff in the hotel’s attic. The jarring soundtrack pulses up until the end which stands as my only gripe for Durston’s film. The climatic ending has it’s formidable bubble popped when the tense scene immediate concludes while obvious questions still remain, such as what happened to Carrie, Lynn Lowry’s character, that goes unexplained?

Australian EX Films presents a monster of a high definition bundle release for David E. Durston’s “I Drink Your Blood” that includes two Blu-ray discs bundled with a VHS clamshell of the film. Inside a reversible artwork case, the first disc is an all region BD50 that stuns in a vivid 1080p in an 1.66:1 aspect ratio. Image quality maxes out with vibrant blues, yellows, and, especially, blood red, your three main colors in technicolor. The second disc gets even better with two bonus films, Del Tenney’s 1964 usual associated doubled bill feature “I Eat Your Skin” and David Durston’s 1969 erotic “Blue Sextet.” Over the course of the two Blu-ray discs, there are a slew of extras including a commentary by David Durrston and the late Bhaskar Roy Chowdhury, four never before seen scenes, video interviews with Lynn Lowry, Tyde Kierney, and Jack Damon, along with stills, poster, and home video art. You’ll also get rare footage of Bhaskar performing “The Evil King Cobra Dance”, the original trailer with two radio segments, and much, much more. Dolby Digital two-channel track vibrates constantly with forefront dialogue, hardly any disruptive damage, and well balanced levels amongst all tracks. The limited edition bundle includes a PAL formatted cassette of the original double billed films, as aforementioned, inside a reversible artwork housed clamshell. And that’s not all! Lastly, this bundle includes a Horror Hypo Needle and LSD Blotter Art tabs, featuring the artwork from “I Drink Your Blood.” Check out the image below to get an inside look. Even though “I Drink Your Blood” beats around the bush with social depravities such as gangbangs, drugs, and a quick stint of Satanic activity, this overall mega fan package from EX Films is a must own for the true video nasty collector or aggregate aficionados of unhinged horror. 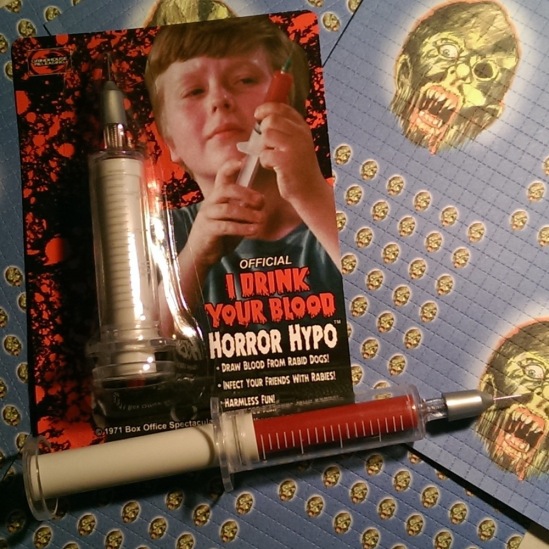 BUY YOUR EX FILMS VHS BUNDLE TODAY! HURRY BEFORE THIS LIMITED EDITION SET IS ALL GONE!