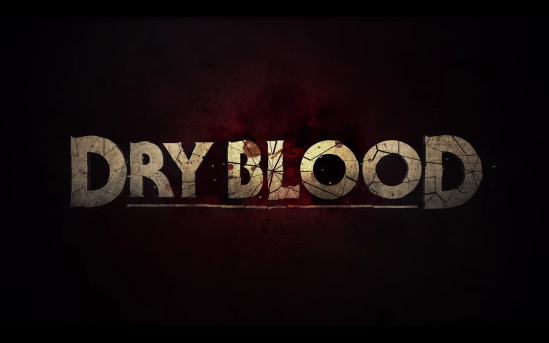 Struggling drug addict, Brian Barnes, travels to his and his estranged wife’s cabin in a rural mountain community to force himself into isolated detox. He calls upon his friend Anna to assist with keeping him focused to sobriety. As soon as Brian arrives, temptation to score rears an ugly head and in his battle with withdrawal, Brian is frightened by his experiences with grisly, ominous phantoms in the cabin, a unhinged sheriff perversely following him, and the disassociation of linear time. He unwittingly falls into a mystery he doesn’t want to unravel as the occurrences of death and hallucinations intensify every minute within withdrawal and Anna doesn’t believe his frantic hysteria with ghostly encounters, but scared and unwell, Brian is at the brink of snapping, the edge of reality, and on the cusp of reliving his nightmare over and over again. 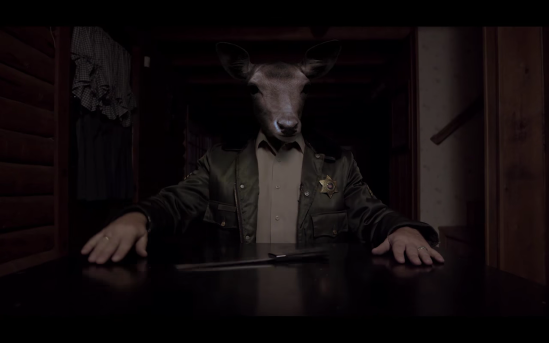 A harrowing insight into mental illness and abstaining from illicit drug use exaggerated by the overlapping of paranormal wedges of weird into the fold and Kelton Jones’s “Dry Blood” renders shape as a detoxing detrimental peak into exclusively being afraid and relapsing that also touches upon the idea of being afraid repeating relapse without consciousness. Under the Epic Pictures’ Dread Central Presents distribution banner, the Bloody Knuckles Entertainment production is of a few original horror films from a media leader in the horror community, leading an exposure campaign that might not have otherwise been possible. Not to say “Dry Blood” wouldn’t have metamorphosed from idea to realty by any means, but the DREAD line opens up films to a broader market, a bloodthirsty bandstand section of sometimes divisive and opinionated fans, who have seen, under the DREAD banner, an innovative horror lineup including “The Golem,” “Book of Monsters,” and “Terrifier.” “Dry Blood” fits right into the mix that’s sure to be a favorable side of judgements. 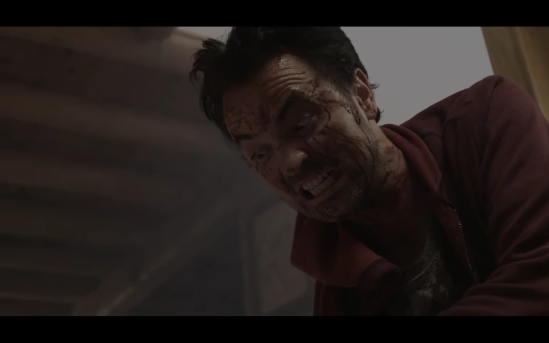 Clint Carney sits front seat as not only screenwriter but also the star of the film with Brian Barnes who tries to reclaim his self-worth and life from long time substance abuse. At the slight entreatment from director Kelton Jones, Carney has a better understanding of downtrodden Barnes character more than anyone and having some experience acting in short films, the writer naturally finds himself ahead of the pack on a short list of talent. However, though Carney has a modestly okay performance, the overall quality in selling Barnes as desperate, duplicitous, and genuine misses the mark, exacting a clunky out of step disposition as the character tries to figure the mystery that enshrouds him. Jones also has a role as the deranged sheriff who stalks Barnes like an overbearing, power monger cop who smells blood in the water. In his feature debut, like Barnes, Jones’ splashes a friendly, yet simultaneously devilish smirk spreading wide under a thick caterpillar mustache that adds another psychological layer in caressing Barnes’ madness. Barnes love interest, Anna, is found in Jayme Valentine and, much in the same regards to Carney, there were issues with her performance as the willing friend to be the support beam to Barnes. Valentine just didn’t have the emotional range and was nearly too automaton to pull Anna off as a person whose romantically unable to resist the addict but can manage to keep a safe distance away in order for both of them to benefit in his sobriety journey. “Dry Blood’s” casts out with some solid supporting performances by Graham Sheldon, Rin Ehlers, Robert Galluzzo (director of “The Psycho Legacy” documentary), and Macy Johnson. 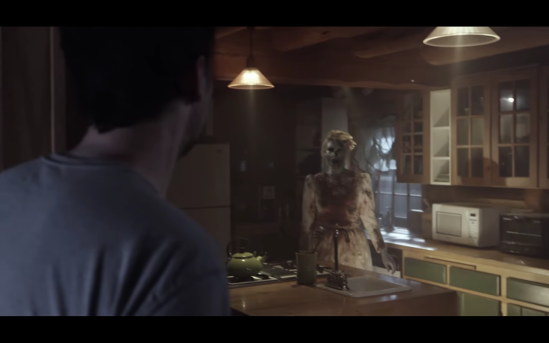 “Dry Blood” is certainly an allegorical move toward the severe effects of withdrawal, even with the title that’s a play on words of a former addict staying dry during their difficult abstaining campaign, and with that symbolism, that ambitious ambiguity, to question whether or not Barnes is actually seeing these horrific images of disfigured bodies becomes open to audience interpretation of their own experience with substance abuse or their empathetic knowledge of it. Combine that individual experience aspect with some out-and-out, gritty moments of bloody violence, especially in the final sequences of Barnes careening reality, and “Dry Blood’s” simmering storyline ignites a volcanic eruption of unhinged blood lava that spews without forbearance. Those responsible for acute effects are Chad Engel and Sioux Sinclair with Clint and Travis Carney rocking out of the visual effects to amplify the scenes already raw and gore-ifying moments. 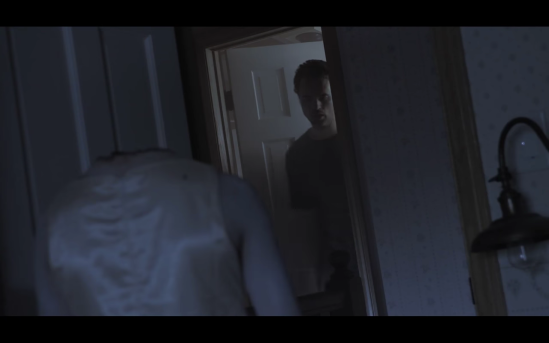 Epic Pictures and Dread Central Presents a paranoia, paranormal, psychological bloodbath of a production in “Dry Blood” and lands onto a hi-definiton, region free Blu-ray home video in a widescreen, 16:9 aspect ratio, distributed by MVDVisual. The 83 minute presentation has a consistent, natural adequacy that delivers strong enough textures to get a tactile sense of the wood paneling of the rural mountain cabin and also the various materials in clothing and skin surface for easy to flag definition. Hues are potent when necessary, especially when the blood runs in a viscous red-black consistency. Darker, black portions have a tendency to be lossy and flickery at times, but nothing to focus on that’ll interrupt viewing service. The English language 5.1 Dolby Digital surround sound has little to offer without inlaying a full size candy bar of action; instead, “Dry Blood” has bite-size appeal that would render okay without audio channel overkill. With that being said, dialogue doesn’t falter and there maintains an ample range and depth of sounds. Surprisingly, the build up of notating the soundtrack composed by System Syn left a disappointed aftertaste as the expectations of an industrial electronic, upbeat score was met only with a casual fling of the group’s spirit. Still, the soundtrack is a brooding horror melody which isn’t unpleasant…just not what was to be expected. Bonus material includes an audio commentary with Clint Carney and Kelton Jones, the making of “Dry Blood,” and teaser and theatrical trailer. Don’t be fooled by “Dry Blood’s” initial crawl approach as when the tide turns, addiction roles into hallucinogenic despondency and mayhem, and the blood splatters on a dime bag detox, “Dry Blood” will factor into being one of the better sleeper horror films of the year.

Dry Blood on Blu-ray! Purchase It By Clicking Here! 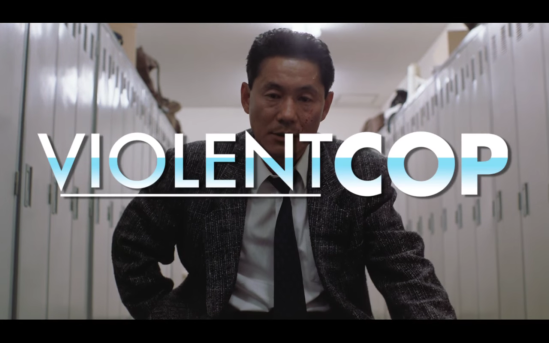 In a city fueled by constant drug trafficking and violence, a weak and corrupt police department has revolving leadership, but one good cop, detective Azuma, of the vice squad doesn’t have the taste for dope. Azuma’s wild card police tactics stir much controversy in his department, placing him on extremely thin ice, but he manages to get the job done no matter the destructive, if yet effective, trail left behind. When the detective learns that his long time colleague and best friend, detective Iwaki, has been involved with trafficking drugs, Iwaki ends up dead in apparent suicide and Azuma will stop at nothing to discover the truth behind his friend’s sudden death. Azuma’s Dirty Harry-style methods catch the attention of a powerful yakuza henchman who kidnaps her and lets his entourage gang rape his mentally unstable sister and with nothing else to lose, the rogue officer shoots first and never asks questions later. 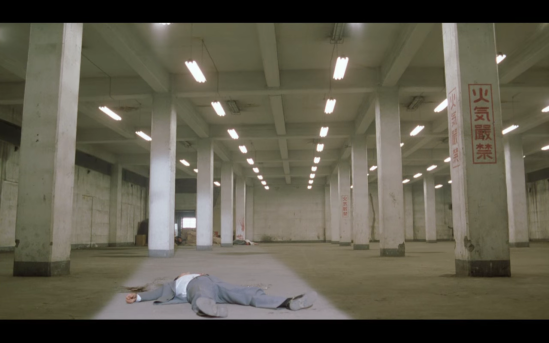 “Violent Cop” is the breakout 1989 directorial film from Takeshi Kitano, one of the most recognizable names and faces in the revival of Japan’s film industry and a staple amongst other mediums including stage performance, television, and other various liberal arts. Kitano also headlines the yakuza genre film as the lead character, the ungovernable detective Azuma, in this unforgiving cop drama under his pseudonym ‘Beat’ Takeshi. Kitano’s harden plastered mug and short, stocky stature caters to the era of lone wolf. rogue cops, providing a hearty performance familiar to that of Clint Eastwood or Charles Bronson. “Violent Cop” quietly packs a punch, patiently waiting to seize the opportunity to display explicitly graphic violence while also being sleek in it’s construction, charmingly odd in it’s humor, and basking more in the parameters of performance than in it’s exposition of dialogue, which is kitano is known more for in his acting. 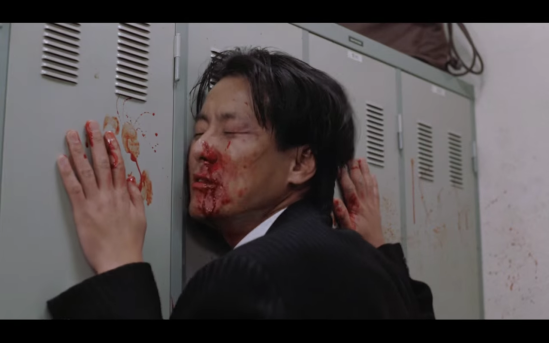 Much of the film revolves around Azuma’s cavalier and stoic personality. In the opening, three teenage boys unjustifiably harass and assault an elder homeless man. Azuma, who happened to witness the assault, follows one of the boys to his home, knocks on the door, identifies himself as a police offer to the boy’s mother, walks up the stairs alone, and slaps the boy around in his own room until the boy confesses and agrees to turn himself in at the station the following day. This introduction not only showcases Azuma’s descriptive title character as the violent cop, but also informs that the work alone Azuma has a vigilante moral principle that even isolates him from his unstable sister. Once a student of comedy, Kitano re-wrote the Hisashi Nozawa original comedic script into a brutal police drama, wanting to exhibit a serious side, but left alone some of the script’s initial comedy elements that blend the spirited yakuza film to being just inside the genre. Kitano’s progressive camera work includes deep long shots along with tight quarter setups, extensive and angled crane shots, slow motion sequences, and long track work that pinpoints Kitano’s diverse style. 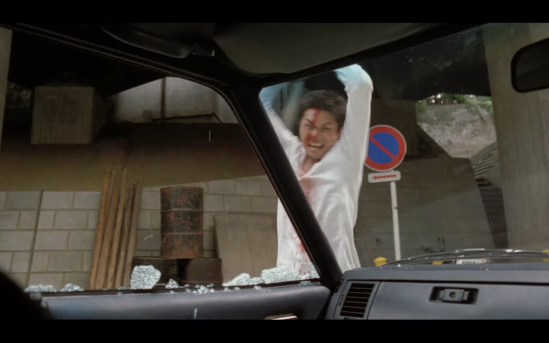 “Violent Cop” lives up to the title. Heads being bashed with an aluminum bat, multiple gory-soaked stabbings, and a sadistic, punishing maltreatments are just a few examples of “Violent Cops” barbaric qualities. The violent scenes feel almost peppered throughout, but they’re really strategically placed between character building segments that only support the necessity of brutality. Did detective Azuma really need to run over a suspect, who just murdered a colleague, down twice with the squad car? Yes, because the suspect desperately and dangerously wielded a baseball bat as a weapon and attacked them numerous time. The actions of the criminal warranted Azuma’s unethical position of bulldozing him over, twice. Only when Azuma is pushed beyond his limits does he lose what was left of any shred of restraints that were holding him back. Azuma meets an antagonistic match, a blood thirsty foe equally resistant and, at the same time, loyal with his boss, creating a villainous mirror image whose just as a loose canon as himself. 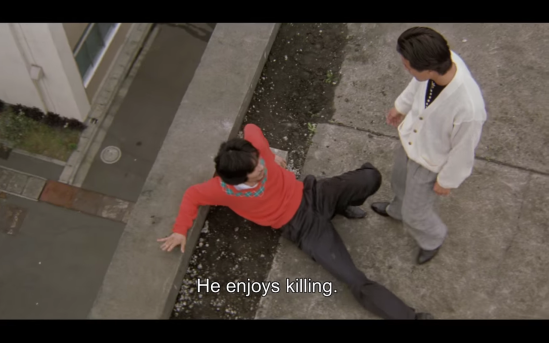 Film Movement, the New York based award-winning and foreign cinema distributor, presents a specialized hi-definition Blu-ray treatment of “Violent Cop” in a sharply detailed 1.85:1 aspect ratio stored on a single disc BD-50. The region A disc provides the best transfer quality of this 1989 film to date with stunning, natural coloring, balanced hues, and defined edges with no signs of compression artefacts. Darker scene noise is present, but to affect the experience, the noise would need to be more extensive. With Film Movement’s release, the noise is minimal and shouldn’t be considered a factor. The Japanese LCPM 2.0 audio track is quality with no hiss or pops. Dialogue is evident in the forefront, all other tracks seem level with an accompaniment range of ambiance, and, like aforementioned, all tracks are clean and clear of distortions. Extras include a featurette entitled “That Man is Dangerous: The Birth of Takeshi Kitano” and an booklet essay with the topic of Takehsi Kitano, written by Asian film expert and film curator Tom Vick. “Violent Cop” offers no sympathy, but provides an abundance of rich, dedicated filmmaking in a raw format that seems almost archaic in the present. Film Movement and “Violent Cop” go hand-in-hand, a foreign yakuza melodrama that saw the beginning stages of rebirth in the last days of a struggling Japanese cinema market and Kitano’s face is at the forefront of that movement.

“Violent Cop” on Blu-ray at Amazon.com!