Bo, Cephus, and their kissing cousin Lulu lounge on their small trailer park camper couch drinking ice cold beer and watching a bag-filled of horror shorts discs. A fear-filled anthology containing four of the best horrifying shorts from some of the most talented and unknown filmmakers displayed for our country-bunpkin viewing pleasure.

For the most part, horror anthologies are the bane of my existence. The appeal of numerous plot lines, not intertwined, swells and overflows the mind. Trying to process it all is like dumping all your Thanksgiving leftovers down the garbage disposal and witnessing it clogging up trying to choke down week old Turkey, bits of yellow kernel corns, and de-gelatized cranberry jelly patties.

…but every once and awhile a worthy anthology gets it right, gets the gist of what makes the innards of good collection of horror shorts. I commend good compilation releases such as “Body Bags,” “Creepshow,” and “ABCs of Death.” Believe it or not or take my recommendation with a grain of salt, but “Hillbilly Horror Show Vol. 1” is on the same awesome level as those I’ve just listed in not so marketable fashion.

Franky and his partner are hitmen and their current mark is a sexy, barely clad young lady. With bag over her head, the two men drag her to the isolated field where an open grave was previous dug. When the target is revealed to the two men, Franky has more in store for his partner and his target than what meets the eye.

“Franky and The Ant” is a quick-wit and smart short about lover revenge in a chilly cold-hearted and thrilling way. This short will make you think twice about the people who are close to you in more ways than one. Directed by first timer Billy Hayes, the festival winning short is a crime thriller with just the right amount of duration and enough story to make it compelling. 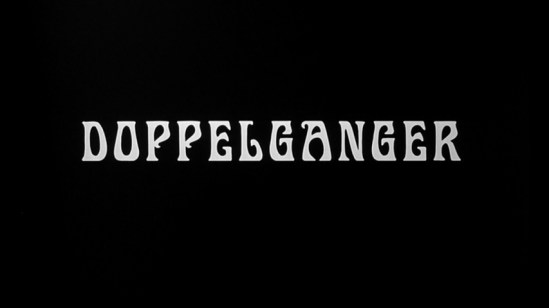 In this stop motion short, a skeleton awakes alone in a cave and ventures out on a journey into the world. Walking across great lands and discovery the desolation of the world, the skeleton stumbles upon another skeleton. They’re both seemingly the same with only the lower jaw missing from the second skeleton. When the journeying skeleton extends a hand in friendship, friendship is not what the doppelganger is seeking. 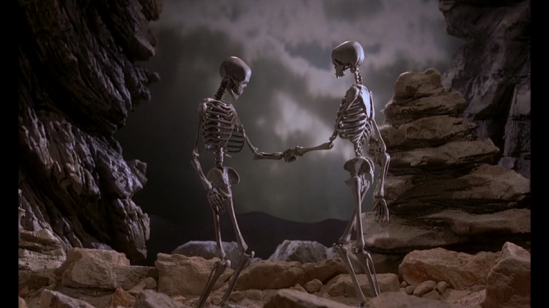 Director Theo Stefanski creates a gothic and surreal looking info life after death and then death again. The message of nothing changes after death is a bit depressing in a comical depiction. The animation wonderfully constructed with love of classical inspirations. The short is short but the takeaway is everlasting.

Martha returns home to her snow covered house to find an insane individual munching on her daughter’s scalp. The crazed man then wears the detached scalp on his head and chases Martha through the cold countryside. With every hope of help, more terror lurks around every corner and its up to Martha to resolve her own salvation against the sinister amusement that has overcome the murders.

Cuyle Carvin is a vet in the film industry and with “Amused” being his first attempt at direction just proves that his experience is a test of time spent on the independent and Hollywood scene. “Amused” is well shot even if the film stock quality isn’t up to snuff; this might have been purposefully done give the tone and feel of the short a more retro sensation. The short has no dialogue and translate so well to the viewer that no chatter is necessary and I would go as far as unwanted. I would love to see more from Cuyle Carvin in the future in the horror genre and see a longer version of “Amused.”

A small town diner has an award-winning, business-thriving honey from a deadly hive of over-sized, flesh eating swarm of bees that are kept secret. When a horse rancher and a government land inspector investigate the remains of a flesh-ridden horse, the diner owner and her dim-witted mute son strive to keep their hive a secret.

Saving the best short for last, Tim Zwica’s masterful short contains flawless acting and a story that fun as it is thrilling. Flesh eating bees. Who know that would be fun? The dark tone of the film’s cinematography surely heightens the appeal of the film and the special effects creates an allure that can’t be ignored. The Nest is produced by the ever-so-lovely Jennifer Scott who also plays a goth-hooligan girl who gets ravaged by the bees. “The Nest” might be a Syfy mega hit if it was made into a full length feature much in the same vain of “Sharknado” but I would predict that “The Nest” would have three times more success. 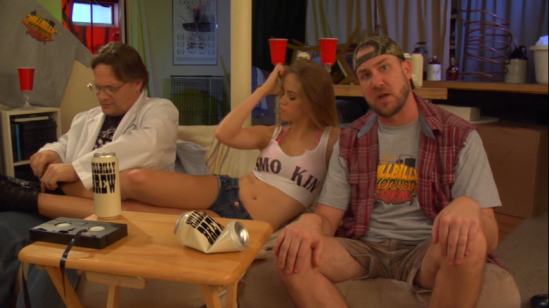 I’m hooked on “Hillybilly Horror Show” and I wouldn’t mind seeing more of Glamour model Rachel Faulker and her skimpy outfits. Horror shorts with girth, grit, and guts unlike any anthology I’ve seen in a very, very long time. The “Hillbilly Horror Show” is today’s Joe Bob Briggs with more redneck fun. MVDVisual brings volume one home and I would recommend this DVD, though the cover lacks much artistic enthusiasm, with award winning shorts as these filmmakers need more exposure and new talent is brooding behind the scenes of Hollywood.