In the dystopian America of 2050, commercialism presides over the middle and lower classes in the constructed wasteland that is United Corporation of States led by an impeccable and blood thirsty Chairman. A popular, carnage-laden sport known as the high octane Death Race has become beloved by all Americans, giving them an escape from their mundane and pitiful existence. The Death Race is simple: war-modified cars trek across the United Corporation of States in a 3-day race to score points by running down citizens of an overpopulated nation as an encouraged way of resetting the out of control producing rate and racers can also seek glory to reach the finish line with best time. Four-time champion, Frankenstein, is the returning crowd favorite and seeks to win a fifth crown, unless the powerful and conniving Chairman decides otherwise.

Under Universal Studio’s filmic sequel and reboot sublabel, Universal 1440 Entertainment’s “Death Race 2050” is a rip-roaring start toward 2017’s best intense action cinema and despite being pre-labeled as just another diluted and benign remake of the Roger Corman produced, Paul Bartel directed “Death Race 2000” from 1975, the modern day G.J. Echternkamp directed and co-directed film with Matt Tamashita honorably doesn’t lose the rich, yet full of cheap thrills, heritage that makes the original “Death Race” so fun, so entertaining, and so campy keeping the pandemonium on four high-performance, face-shearing tires. Even though Death Race has been quiet for over thirty years since 1975, the last decade has been riddled with Death Race films produced by the legendary low-budget filmmaker Roger Corman and all have been complimentary exclusive in their charm, mayhem, and versions of the lead character Frankenstein to thrill audiences, but it’s “Death Race 2050” that revs in true remake fashion of similar plot structure that changes all but one character.

New Zealander Manu Bennet carries the torch in portraying the original character Frankenstein, a four time champion with a leather covered body that’s been ravaged and cybernetically repaired from previous race crashes. Manu’s charisma and rugged image will win over audiences as he perfectly embodies a conflicted champion on the brink of doing what’s right; a tone very similar in all “Death Race” films. Manu is paired with actress Marci Miller, as Frankenstein’s passenger proxy, who dishes out the good girl sex appeal with a self-reliant rind. Beyond these two characters, even with a moniker like Frankenstein, the remaining characters make Mike Judge’s “Idiocracy” a college course of rocket science! Deliveries were timely, actions were precise, and performances couldn’t have been more meticulous in scenes with Jed Perfectus, the genetically engineered and ambiguous pretty boy played by Burt Grinstead, Minerva Jefferson, the wealthy ghetto rapper forged to life by Folake Olowofoyeku, and with Tammy the Terrorist, a cult leader with a celebrity high power portrayed by 2007’s “The Signal’s” Anessa Ramsey. The relatively unknown cast is whole-heartedly glued together by the flamboyant performance of “Clockwork Orange’s” and “31’s” Malcolm McDowell as the Chairman. 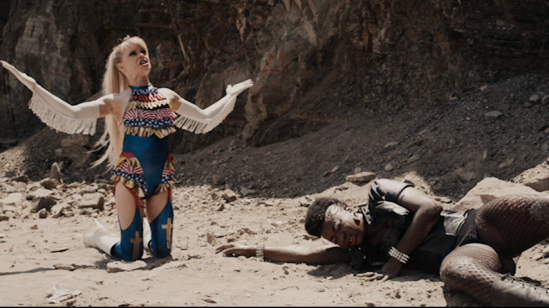 One could take a good stab in the dark on what the quality of the effects would be like for any Roger Corman produced film. In this instance, “Death Race 2050” channels much of Corman’s style with Echternkamp and his visual effects supervisor Anthony J. Rickert-Epstein (“Sharktopus vs. Whalewolf”) supplying rotoscope blood and dismemberments that pin-pricks a visual stimulate into the vein of the snobbiest of film aficionados and can be on an everlasting high. The simple, but effect, gasoline based pyrotechnics attest to the dedication of the crew and to the stunt work to know that if they miss their spot, they’re literally toast. However, the sometimes choppy, rapid editing drains some of the juice from the kills that attempt to piece coherent death sequences with humor and action. In fact, “Death Race 2050” redlines just like the modified, manslaughter vehicles used to rundown babies and the elderly to score points by quickly jumping to the next segment in order to sustain all the gory story’s girth.

“Death Race 2050” is adrenaline flowing wildly adjacent with gasoline, exploding with gore, and is terrifically enjoyable. Echternkamp’s script bares no sense with the sensitivities, secreting American wealth, greed, and stupidity in an environmentally degraded America filled with large high fructose corn syrup soda, an addictive cheese whiz byproduct, and borders that are named after corporate conglomerate of brands such as Walmart or Texaco. Universal’s R rated Blu-ray, DVD, and Digital HD release of the New Horizon film is an 1080p of the 1.78:1 widescreen presentation that makes the film look cheap due it’s hi-def attributes. The image quality is sleek and vibrant with a wide range of rainbow hues and the definition doesn’t ever thrown in the towel. The three option audio selection that consists of an English DTS-HD Master Audio has a lossless appetite that delectable distinguishes the channels where explosions are bombastically LFE and the gory parts are viscerally squishy. The dialogue is surprisingly clear through the amount of chaos. Bonus features include “The Making of Roger Corman’s Death Race 2050,” “The Look of 2050″ featurette,” a closer look at the cars in a segment entitled “Cars! Cars! Cars!,” a cast car tour, and deleted scenes. Even if the story’s timing is a spastic, “Death Race 2050’s” a guilty pleasure from start to finish line under the caustic cinematic eye of Roger Corman!

Buy it today on Bluray/DVD/Digital HD!