Struggling to survive the conditions of the outside world, a brother and sister locate shelter inside a desolated complex and stumble upon it’s strange inhabitant, a solitary middle-aged man named Mariano with a penchant for welcoming his insanity. The alcohol distilling and isolating embracing Mariano has a twisted offer for harboring the young siblings as he also puts the two to work, constructing Mariano’s trash-ridden home into a cavernous structure from taped scraps of lumber and cardboard. Mariano desperately needs them to explore unorthodox depravities upon themselves to become one with their unhinged host that forms, in more than one way, one flesh-ravenous happy family. 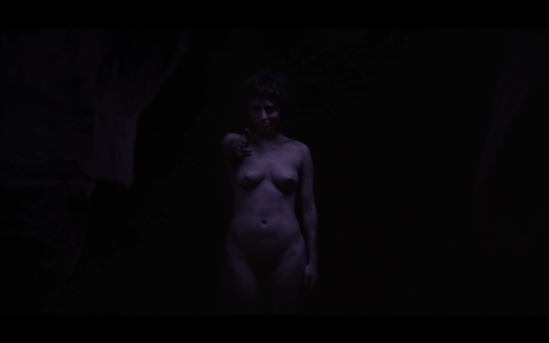 “We Are the Flesh,” aka “Tenemos la carne” in the original title, is an experimental art house feature from controversial Mexican director Emiliano Rocha Minter. The 2016 film harbors more than just three hermit individuals dipping their toes into a forbidden pool of acts, but also provides numerous metaphors and symbolisms that might be hard to swallow and difficult to sit through during the 79 minute runtime. “Sin Nombre” actor Noé Hernández stars as Mariano and there isn’t enough praise in the art house world from his performance that consumes his mortal being, transforming him into a well oiled psychotic machine with a blazing stare, a certifiable grin, and a defined muscular physique. Hernández steals scenes left and right from his young and novice co-stars María Evoli and Diego Gamaliel, whom are equally as brave as the more experienced Hernández in their respective roles. “We Are the Flesh” emits racy undertones by just hearing the title alone and, absolutely, lives up to the title’s very core by displaying non-simulated sex acts. Think about it. Minter’s film only has three main characters for most of the narrative and two of them are siblings. Yup, Minter went the incest route for the sake of art.

In the opening scene, heavy breathing creeps upon a black screen until the image pops open to a Mariano’s face, laboring over something. Next cut is Mariano hunched over with a high stack of baled cardboard, walking in the color tone of a dark cool blue with a slight haze engulfing him. This opening scene is one instance where Mariano is portrayed the Messiah prophet Jesus. Other religious symbolistic events that connect Mariano, who would be condemned for his actions in the Christian scope, to Jesus that occur throughout, such as being dying and being reborn, the cave aspect, the motifs of faith from the mysterious eye dropper liquid, and being the sacrificial body as if transpiring to be some sort of demented wafer during a crazed cannibal communion orgy. Of course, opening anybody’s eyes or mind to this notion can be immensely difficult and profanely sacrilegious to even spell it out in text because seeing the streaming drug use, the attempted murder, the cannibalism, and the sibling incest rule the majority of the narrative makes a case that affiliates more with an unholy antichrist rather than Christ, but I believe director Emiliano Rocha Minter, being a Mexican national and growing up in a Catholic, like the majority of Hispanics, culture aimed to blur the lines between the heavens above and the fires below and embodying them as a singular whole.

Intrinsically irrational and insatiably grotesque, “We Are the Flesh” has momentum in a colorfully abrasive form, quickly evolving from act to act with characters reemerging anew every second onscreen. What might seem as a visionless quest for the sole purpose of producing shock value can be re-construed as a message more aesthetically beautiful in man’s most detested nature. Yollótl Alvarado’s cinematic vision is absolutely dripping with gripping, mature atmospherics that are well doused in vividness while, at the same time, being despairing in a post-apocalyptic haze. The experience charges at you, pulls you into this cavernous womb, and scratches at your tender barrier lining, trying to sneakily slip into your soul. The sensation is as much unreal as the film’s avant-garde structure.

Produced by production companies Piano, Detalle Films, Sedna Films, Estudios Splendor Omnia, and Simplemente, “We Are the Flesh” is a poetic approach experimental wonder, gratifyingly brought to home entertainment fruition from Arrow Films in the United Kingdom and Arrow Films, in conjunction with MVD Visual, in the United States on Blu-ray and DVD. Between Lex Ortega’s brutal social commentary gore-flick “Atroz” and Emiliano Rocha Minter’s art house metaphor “We Are the Flesh,” Mexican filmmaking stands high and bold, unafraid to tell unapologetic stories in conservative societies; a mere taste of what’s to come, I’m positive. While recommending this type of film isn’t the easiest for status quo movie lovers, “We Are the Flesh” hopefully will expand minds, open eyes, and encourage skin-on-skin contact for the cinematic adventurers.

“We Are the Flesh” available in USA! and in the United Kingdom!