When Camille’s parents awake to an unknown and encompassing rumbling and what sounds like agonized wailing, they decide to go investigate not too far from their camping tent where their daughter, Camille, still sleeps. When Camille awakes, the rumbling is now deafening and her parents have disappeared into the night, leaving the young child frightened beyond belief. 25 years later and still haunted by the phenomena, art post-graduate Camille conducts recorded interviews with witnesses of the event along with James, a film studies student working on a documentary project. When the rumbling returns in the Nevada desert, Camille and James take a train to record research just outside the affected area and not become too close to the dangers that’s traumatized Camille, but when the train stalls in a tunnel halfway to the destination, Camille and James awake alone with no passengers or conductors in sight and a rumbling noise that isn’t the train’s engine. Camille finds herself once again in the midst of wailing and now something outside the train is trying to get in. 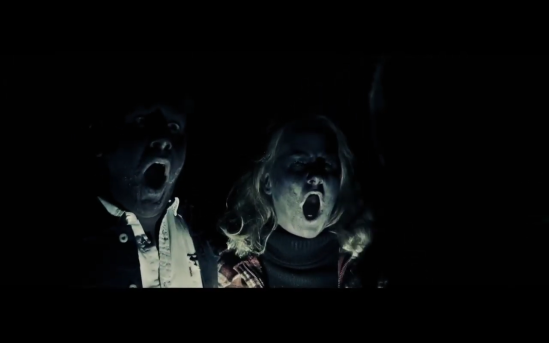 Stick “Infernum” into the sub-horror category of the great and fear-inducing unknown perhaps based loosely off the unexplained low-frequency hums, such as a Taos hum, stretching from the U.S. to the U.K., writer-director Dutch Marich sensationalizes the phenomena by adding the trimmings of tortured souls howling in torment as a rift opens up between Camille’s world and, supposed, Hell. Filmed primarily inside an antique rail train from the Northern Nevada Railway Museum and inside the railway tunnel west of Ely, Nevada, the “Hunting” and “Miserable Sinners” filmmaker, Marich, slow churns a low-budget friendly and simple plot into a materializing worst case scenario with the anxiety-riddle markings of being trapped, surrounded, and alone inside a dark and confined space with a cacophony of screams, as if in a dark-padded psychiatric cell. Mariach’s Luminol Entertainment and Vekinis Studios, headed by former Luminol Entertainment employee, Peter Panagiotis Vekinis, collaborate on the project.

Playing the traumatized Camille is “American Mummy” and “Dude Bro Party Massacre III” b-movie actress, Suziey Block, who has to not only struggle with coping against the hauntingly strange event plaguing her past, but also deal with an overprotective, yet also apathetic boyfriend in a role filled by who could very well be a young Christopher Meloni lookalike, “Happy Camp’s” Michael Barbuto. Block’s become something of a scream queen over the last few years and “Infernum” continues to make the Michigan born actress keep screaming her lungs out; however, its Camille and Hunter’s hot-and-cold relationship that topples the main theme here as Camille, through Block’s insensate performance, feels disinterested in unearthing what happened to her parents while being too engaged in Hunter’s desensitize, if not rightly justified, position toward her glazed over stress, but Block is engrossed by the fear just enough to sell it. Rounding out Infernum’s cast is Clinton Roper Elledge, Sarah Schoofs (“The Theatre of Terror”), and Rita Habermann.

“Infernum” can feel like a simmering slow burn of paranormal byproduct and resonates closely with Milla Jovovich’s extraterrestrial faux found footage thriller, “The 4th Kind.” The lingering scenes with tedious exchanges render a remote sense of terror that’s teamed with more tension from Hunter and Camille’s argumentative discourse. Yet, when things seem to be dwindling as Camille and her filmography friend, James, board the vintage train to the ghost town of Kimberly (and when I say ghost town, I mean an abandoned mining area), that’s when things go from a steadfast numb to a terrifying turn of the inexplicable circumstance kind. Camille finds herself in a familiar situation like 25 years ago, but the environments different with desolate train, an ominous presence over the loudspeaker, and though most passengers have disappeared, there are some who are found, blue as ice in the face, and lifeless. The tension is thick with the engine rumbling of an infernal-sounding machine that reeks havoc with cries and screams to amplify night jitters. The open ending leaves room for a wide berth of possibilities and interpretation, making “Infernum” metaphysically loiter in between the rifts of our minds.

“Infernum” is a spooky train ride to hell and back, pulling into the DVD home video and digital platform station from the independent film distributors, Indican Pictures. Unfortunately, the video and audio quality will not be covered because of the DVD-R screener, but I can say that the LFE audiophiles are immensely characteristic and behooves viewers to play on a surround sound system or quality headphones will also do the trick. The film’s innate hues are on the bleaker, gloomier side, backdropped by the frigid air of a wintery Nevada dessert. Other than Indican Pictures’ trailers for other films, including “The Lurker” among other films, there were no other special features beyond a static menu. I highly recommend “Infernum’s” spooky vibe and unlimited possibilities all aboard it’s simple, yet effective paranormal premise.