Unorthodox exorcist and hobby writer Richard Vanuk lives a depressing and humble life full of endless booze and filthy altruism. Driven by the need for alcohol and an underline desire to help possessed strangers for a small fee, Vanuk barely maintains his own sustainability. With each challenging case of demonic inhabitance, the poor full time exorcist, and part time writer, expels demons from their misfortunate hosts into his own wretched soul, draining his self-respecting humanity out of him one demon-expulsion job at a time. The deeper Vanuk spirals downward into nihilism and the deeper he goes into severe debt, the choice to withdrawal from the toll of exorcising demons becomes no longer an option, but a fruitlessly fateful venture to just surviving in a world that’s scarce of good people. 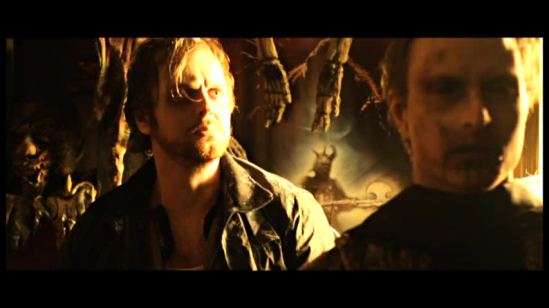 My second undertaking into a Daniel Falicki horror film has the “Awaken The Devil” director batting a solid hundred percent on the ever honest critique block, going a strong two-for-two with his latest film, 2016’s “Accidental Exorcist,” that’s drenched with a despair atmosphere that swallows the intentionally pathetic character who is granted only a glimmer of unattainable hope for a good life. The writer-director has a keen eye for developing horror in various comedic, dramatic, and absurdly berserk formatted segments, delicately defining details to capture memorable moments. Falicki also stars as his own character, Richard Vanuk, and Falicki charms the audience by creating a likable anti-protagonist whose cavalier about demonic possessions and begrudged by a “corporate” employer who pays very little for the precision of demon banishment; this same company performs a stigmata on him after every exhausting job, discarding his limp, unconscious body in a different snow covered park afterwards.

Falicki drowns Vanuk in vices and addictions. Aside from the obvious alcohol and constant inebriation, Vanuk needs the pain of performing exorcisms as much as he loathes the process and the people who employs him. The character can’t reform, can’t function properly in normality, as witnessed when his successful brother offers Richard a once-in-a-lifetime position at his mundane company of pigmentation for sports equipment. When the exorcism well runs dry, Vanuk goes into full blown, borderline psychotic detox as he’s cut off from his, one and only, natural born skill and the ceasing of his per diem position sends him into frantically gulping down bottles of cold medicine to get a soothing fix. Falicki punishes the audience beloved, unconventional exorcist by having Vanuk fall to the bottom by not being unlucky or plotted against, but by simply self destruction and having God turn his back on his loyal servant when the promise, or a test, of a favorable outlook reveals itself.

The casting couldn’t be much more perfect with a cast of talented b-movie stars such as Jason Roth (“Awaken The Devil”), Chris Kotcher, and Jeffrey Goodrich to quickly name a few. Falicki owns Richard Vanuk, embodying the character so brilliantly that I would have a hard time relinquishing Richard Vanuk from Daniel Falicki’s face. Falicki pulls out all the stops by putting every once of degradation the director can muster into the downtrodden exorcist with a performance that sells his hapless nature and spew-filled gigs. Every client Vanuk attends to is portrayed honestly and earnestly from Sherryl Despress’s role of a desperate mother turned possessed super sewer to Patrick Hendren’s blind and levitating demonic being who goes on to have a heart-to-heart with Vanuk after an exorcism recovery.

“Accidental Exorcist” is unapologetic and shameless; a real nasty bitch to love unconditionally. The fun soars above the summit and the ingrained heart bursts beyond the restrictive seams of the reel. The film is nothing I’ve ever scene before; yet, still manages to homage legendary films that “Accidental Exorcist” built it’s bones upon. Similarities to, of course, the iconic William Friedkin’s “The Exorcist” are apparent throughout with the almost beautifully grim and isolated atmospheric exterior scenes of foreboding destiny. Falicki’s film contains special effects so convincing by leaps and bounds when compared to other modern independent horror, portraying Vanuk so well within the confines of his dank and dejected existence that it’s as if he’s sharing his grime and his loneliness with us that’ll result with a quick shower when the credits roll. 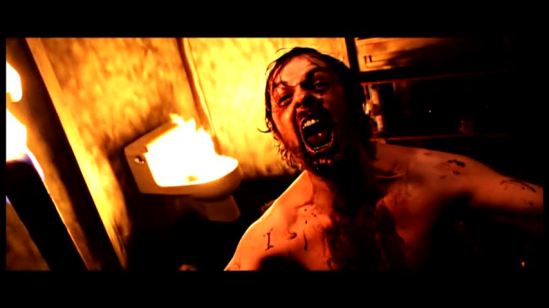 Sector 5 Films and Rotomation Studios courtesy produces “Accidental Exorcist,” that’s not related to the Joshua Graham novel, but the audio and video will not be critically reviewed since I received and viewed a press screener and the film has yet to be released onto a home entertainment platform. However, make no mistake that “Accidental Exorcist” strides cockily into the first half of 2016 horror season, flying unnoticed, under the radar, as sleeper agent dangerous to demonic possession film competitors. Director Daniel Falicki is on the up and coming watch list like a high target terrorist, striking the heart of modern day horror and putting fear, and comedy, into a cynical cauldron.

Brothers Todd and Vernon Dopple are a pair of homeless drifters in New York City. To beat the cold city weather, they take shelter in an abandoned run-down building only to stumble into a dark and dank Devil worshipping den where vicious demons, tortuous succubi, and a psychological terror have chosen the brothers in order to re-awaken the Devil.

“Awaken the Devil” is not a fast-paced, on-the-edge of your seat demonic thriller and, you know what, that’s okay. Director Daniel Falicki’s combination of live-action and overlapping animation marks some spectacular rotoscope-esque filmmaking, think “A Scanner Darkly” or “Waking Life”, that looks really cinematically neat on screen with unique visual effects especially of the hovering demonic succubi. Without the animation, I fear that “Awaken the Devil” would suffer greatly from the film’s slow, but not too terribly slow, pace as the characters do a lot of wandering around the city without any direction until the day ends and the night begins. Luckily, we’re stuck with entertaining and passionate actors.

The two main actors, Jason Roth as the wheel-chair bound mute Vernon and Matt Simpson Siegel as his drug addicted and cynical brother Todd, sold us hard on their performances. Roth delivers a powerful silent performance and uses remarkable versatile facial expressions that goes above and beyond the budget of this film. Siegel is given loads of dialogue (nature of the beast when you’re character’s brother lacks a voice box) and sometimes resembles more of a rambling rant about his historical envious and predominantly jealousness, sometimes melancholic, of his brother. However, the dialogue is much more than just words on paper and the film revolves around this dialogue between the two brothers creating an underlying layer that is deeply involved than just some mindless succubi leaching the life of two homeless souls.

Overall, I would recommend at least one viewing of this Sector 5 and Rotomation Studios film. Just beware than after the first five minutes of great introductions and musical track from The March Violets, you might want to be doing something else between then and when run-down building. Don’t be discouraged; “Awaken the Devil” is a well edited, well directed, and well animated film that is unique and certainly haunting.

Audria Larsen – See-through breasts – Audria Larsen is the first succubus that enters the scene and latches itself on to Todd. Audria’s scene is brief, but as she’s floating above Todd, there is a quick glimpses of her chest through a see-thru top.  She’s also involved a “ghost” sex scene with Todd where she cowboy rides him until she reveals her true self. Audria Larsen is a burlesque/circus art model for Model Mayhem under the moniker Vivacious Miss Audacious and Larsen is also fairly good at hula-hooping and suspension which she tackles on a little bit in the film.  It’s a sexy scene, but there rotoscope animation makes it a bit murky to full grasp Larsen’s assets.