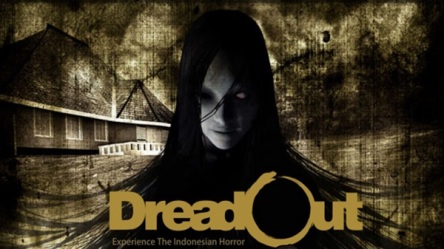 Oh how I miss the good old days of horror games on the Playstation 1 and 2. Sure we may see the genre coming back this generation but it just doesn’t feel the same. All the classic horror games we have played are either dying, abandon, or just kept from us like how Nintendo is handling the Fatal Frame series. We shall not give up hope though, as there is a game currently out now on steam that is oozing with nostalgic horror goodness!

DreadOut is an Indonesian survival horror game that was developed and published by Digital Happiness. The game is heavily inspired by the Fatal Frame games and is centered around a group of students who are trapped in a cursed and haunted town. DreadOut focuses on real life Indonesian folk lore and ghost stories, much like how Slender: The arrival is based on western folk lore character ”Slender man”.

I was not kidding about how this game oozes nostalgia. The atmosphere of DreadOut feels just like a Fatal Frame game, with it’s dark atmosphere and slow paced gameplay. When it comes to graphics, DreadOut is visually lacking. It’s graphic are very low res and look like what you might see on a playstation 2 or PSP game. Still the graphics have a charm and add to the creepy feel of the game and I love it! The design of the ghosts is what makes this game terrifying, nothing like walking down a pitch black corridor with nothing but your phone’s light on and then suddenly having a ghost based on a real life folk tale scare you! This just makes the game too bad ass.

The gameplay is very simple. It plays pretty much like a Fatal Frame game, it is in a third person perspective and you must use your smart phone to battle ghosts and find hints to solve puzzles. The game does promote exploration since there are collectibles for the player to find in order to unlock achievements. The player can also collect power items that will aid them in boss battles. The game has two endings; both good and bad. So make sure you try to get the true ending on your first play through so things can make a bit of sense.

Difficulty wise this game can be hard for new players. I admit that I died alot during the first boss battle, but this is a good thing since it forces the player to find out what the bosses weakness is and use it against them. Once you know how to defeat the enemies the game is quite easy to play. Unlike classic horror games, this game is not very long and that was kind of a bummer for me. The game is about 4 hours long, even shorter if you rush through it. For me I wished it was longer since I was starting to get so immersed into the story and wanted more.

For music in the game, it was amazing. The soundtrack fits perfectly and sounds so awesome during boss battles. My personal favorite track has to be the cover of Gloomy Sunday by Sarasvat; Which serves as the game’s main theme.

All I can say about DreadOut is that the game is amazing and I hope to god we get a sequel. There is so much unanswered questions to the story and so much content here to make a franchise off of. My personal rating for DreadOut is a 8/10. My only complaint is that the game was way too short but with the story, music, and some pretty cool innovative parts in the game that I wish we saw in other horror games made up for the game’s length.

So if you loved the old Fatal Frames, Silent Hills or even Resident Evil games. Then please go play DreadOut you won’t be disappointed.

DreadOut is available on Steam and Playstation 4 for $14.99