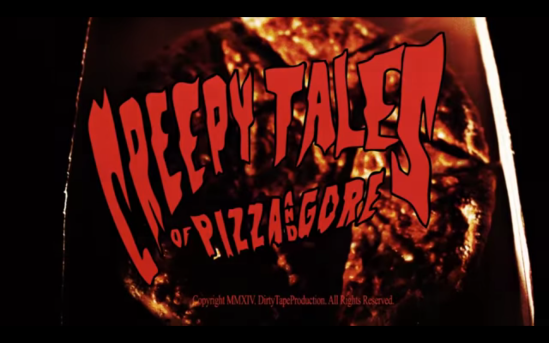 Pizza, that delicious concoction of bread, marinara, cheese, and your topping of choice kneaded and pieced together in a gooey circular of staple culinary awesomeness, has somehow found its way baked into an Italian-sans-meatball horror anthology that promises an equally saucy taste of crusted blood red gore. Five varied, harried tales of horror molded into a gruesome and terrifying VHS-style that will send chills down your spine as you swallow your first piping hot bite of pizza will either have you hungry for more or hurling out your pepperonis. These tales of macabre include the cursed audio tracks of a deadly screaming ghost, the grisly torture and murder in the name of Satan, the tragic and supernatural deaths of two ill-fated lovers, a wooded creature stalking stranded motorists, and a VHS tape that seeks revenge on its former, ungrateful owner. 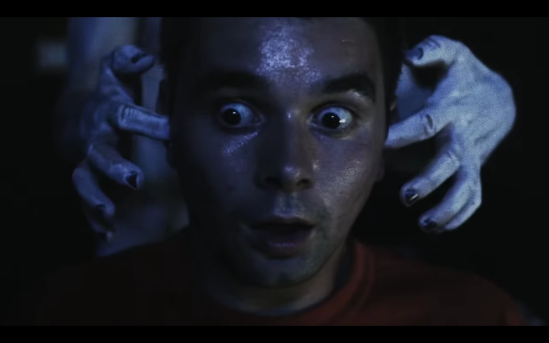 Let’s take our time traveling machine back to 2014 where Italian filmmaker, Lorenzo Fassina, releases his second feature directorial film behind the horror-comedy, “Anamnesi Mutante,” transmitting by way of a five tale anthology humorously entitled “Creepy Tales of Pizza and Gore;” the titles of the shorts are “Screaming Ghost,” “Devil of the Night,” “Alone in the House,” “Wood,” and “Killer Tape.” Co-directed with producer Marco Giangiarelli, The Milan born Fassina’s background also includes being a director of a collection of short films and music videos for bands that include Italian metal bands Cripple Bastards and Viscera///, similar music scores the anthology. The eclectic tales that greatly homage horror of the 80’s that include rich in color film titles and poignant atmosphere audio mixes, each have a runtime average of approx. 10 minutes long, and offer a mixed macabre of subgenre goodness from technological horror to inanimate object horror besieged with an interlacing host, a faceless, demon-like presenter with much to say, much like the Crypt Keeper. My apologies in advance as the screener that was provided didn’t have subtitles so the host’s soliloquy goes mostly misunderstood, but by the way of editing and how the syntax is structured, one would assume the ghoulish emcee sets up the pizza eaters with the next short video nasty. “Creepy Tales of Pizza and Gore” is produced by Fassina’s indie company, DirtyTape. 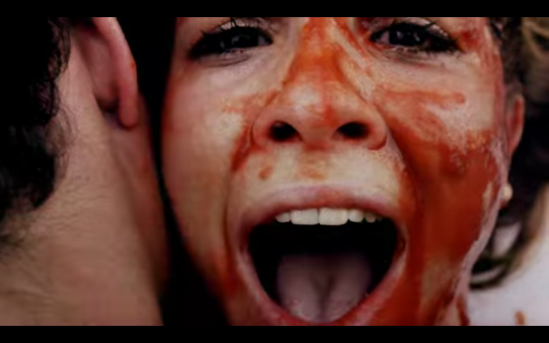 Most of us in the States more than likely won’t find any familiar faces inside the confines of these five tales and, know what? That’s okay! Aside from our hell bound host, there’s not a lick of dialogue spoken, but the capability to connect with the characters and the capacity to understand the story without words is as transparent as crystal clear waters of the Venice canals. An assemble of facial and eye expressions and a well edited together script and structure by Fassina for each short provides a sustainable and a sufficient menacing mixed bag of mouthwatering horror. The largely novice cast has either worked on previous projects with Fassina before or are an unknown delight to us viewers and cast list includes Sara Antonicelli, Beatrice Cartoni, Jonathan Farlotta, Jacopo Grandi, Francesco Marra, Tommaso Meledina, Alessandro Melito, Riccardo Tiberi, and Bunny Roberts with a cherry on top topless scene for good measure. 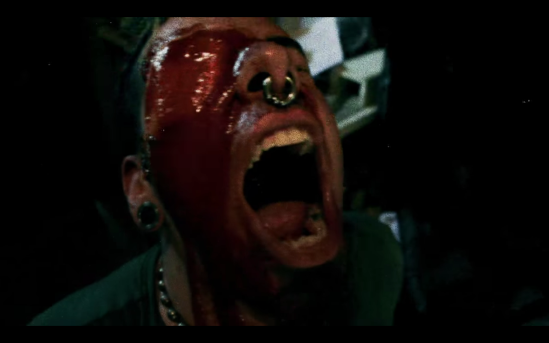 I’m not a terribly big fan of anthologies. Yes, I enjoy “Creepshow 2,” like every other horror fanatic smuck, and I do revel in the grave zest of the low-budget spectrum, especially with compilations from directors of the “HI-8”, aka “Horror Independent 8,” that featured the bloodbath films of some 80s/90’s SOV prodigies in Ron Bonk, Donald Farmer, Tim Ritter, and Marcus Koch, but most anthologies find their unsuccessful way right toward the trash bin, condensed to third-rate releases with little-to-no marketing and hardly any surplus material in the special feature department. “Creepy Tales of Pizza and Gore” may be a foreign anthology barely making an insignificant speck in the cinema market, but certainly shouldn’t be overlooked as the derived golden age of an immensely beloved straight-to-VHS horror courses through the veins of Fassina’s reverencing anthology. The stories garnish b-reel content, but not necessarily effortless or incompetent in substance and range from serious, to tongue-in-cheek, and out right absurdity, with the latter stories being the weaker links. In all, it’s a fun and entertainment horror show from our Italian friends.

“Creepy Tales of Pizza and Gore is delivered fresh and blood warm onto DVD home video courtesy of the New Jersey based distributor, Bayview Entertainment. As aforementioned, Bayview Entertainment publicity provided a streaming screening link so the audio and video aspects will not be critique for this review, but the DVD specs include a single disc, Anamorphic widescreen presentation, with an unrated rating on an Italian language anthology that, supposedly, has English subtitles – my screener did not have subtitles. Bayview Entertainment’s DVD casing resembles entirely like a VHS-cassette with faux movie rental stickers stuck on the outer plastic. The packaging is a nice and warranted touch to a VHS-homaging anthology. There were no special features included with the screener or released in the press release. Chow down on night with “Creepy Tales of Pizza and Gore;” a validating horror anthology worthy of time and effort and reaffirming the faith in anthologies once again with wild, imaginative macabre ambitions without the stiffening efforts of pushy financiers calling behind-the-wheel shots.