Life is seemingly pleasant and happy-go-lucky when two fully loaded coach buses of high school girls travel down a forestry passageway toward a lakeside hotel until sudden violence and gore turns Mitsuko’s classmates into minced meat. Overcome with shock and fear, Mitsuko escapes the terror only to find herself in another horrifying scenario. The vicious cycle continues as Mitsuko is thrusted into one chaotic, blood-splattering world after another, quickly losing her identity with each threshold crossing, and with no clue of what’s going on and how she got into this limbo of hell, Mitsuko must stay alive and unearth the truth behind the surreality of her being. 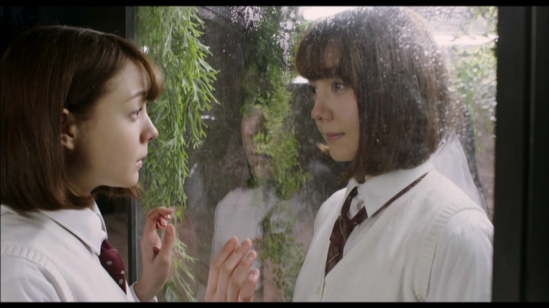 Nothing is more terrifying than being in a heart-pounding situation and not having one single clue why bodies are being sliced in half like corks popping violent out of champagne bottles, why childhood mentors break their professional oath and slaughter students with a ferocity of a mini-gun, or why being chased by a tuxedo-decked out groom with a gnarly pig head is in tow ready to drop kick anything, or anybody, standing in the way. Writer-director Sion Sono manifests that very chaos entrenched world in the 2015 action-horror “Tag” and, once again, the “Suicide Girls” director puts Japanese school girls back into the harrowed ways of gore and death over salted with an existential surrealism based off a novel by Yûsuke Yamada entitled Riaru Onigokko aka Real Game of Tag. Yamada’s story is followed more closely to that of Issei Shibata’s 2008 “The Chasing World” that involves a Government influence and parallel universes, “Tag” serves more as an abstract remake that Sono masters a soft touch of irrational poetry bathed in gore and strung with chaos rectified with a tremendously talented cast of young actresses.

Actresses such as the Vienna born Reina Triendl. Being Japanese doppelgänger to Mary Elizabeth Windstead with soft round eyes and the picturesque of youthfulness, Triendl transcends tranquility and innocence when portraying a content Mitsuko in the midst of many of her classmates boorishly bearing the typical, low-level adolescent anarchy. When Mitsuko’s thrusted into phantasmagorical mayhem, Triendl steps right there with her discombobulated character in an undried eye panicky frenzy whose character then spawns into two other fleshy vessels, a pair of recognizable names of J-Pop fandom in Mariko Shinoda and Erina Mano, when Mitsuko enters another zone in her fictional world. Though different in all aspects of their appearance and in name – Misuko, Kieko, and Izumi, the three women share the same existence and fathom a unbroken entity of character that hacks her way through the brutal truth. The remaining cast, Yuki Sakurai, Aki Hiraoka, and Ami Tomite, sport the high school miniskirt wardrobe and garnish a bubbly-violent J-horror persona very unique to the genre. 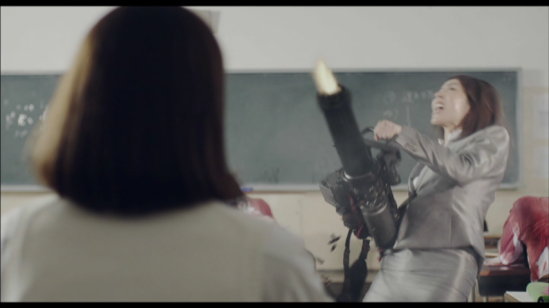 “Tag” is a plethora of metaphors and undertones likely to be over-the-head of most audiences, but if paying close enough attention and understanding the subtle rhythmic pattern of Sono’s direction, the gore and the fantastic venues are all part of an intrinsic, underlining message of feminism and sex inequality that’s built inside a “man”-made, video game structure thirty years into the future. Sono points out, in the most graphic and absurd method, how men treat women like objects or playthings. There’s also a message regarding predestination with white pillow feathers being the metaphor for fate and being spontaneous is the key to break that predestined logic and all of this corresponds to how Misuko, the main character, needs to break the mold, to choose her path, and to remember her past in order to free all the women trapped inside a male-driven purgatory of pain, punishment, and pleasure. Supporting Sono’s ability to disclose an epic survival-fantasy horror in such a way comes from multiple production companies, one of them being NBCUniversal Entertainment, providing the cash flow that allows Sono to flesh out the gore, to acquire massive amount of extras, and to scout out and obtain various locations.

Eureka Entertainment presents a dual format, Blu-ray-DVD combo, of “Tag” for the first time in the United Kingdom. However, the disc provided was a feature-only screener and a critique on the video, audio, and bonus material will not be conducted, but in itself, “Tag” is a full throttle encephalon teaser warranting a need for no supplementary content aside from conventional curiosity into what makes Sono’s “Tag” tick. When all pistons are firing, from the visual effects of Satoshi Akabane to “The Walking Dead” familiar score, “Tag” is no child’s game with a heavily symbolic, touch-and-go and bloodied pro-feministic essence that would serve as an abrupt and acute wakeup call to all the Harvey Weinsteins in the world that women are not to be simply playthings and that their gender destiny lies solely with them despite the misconstrued male manipulation.