Leah has tirelessly tried everything to please her misogynic and negative husband Daniel, even going as far as dressing up in a skimpy and sexy Wonder Woman outfit and serving him his cake in more ways than one.  Yet, nothing seems to be chipper his spirit as he barrages her with meanspirited down talk that disparages her in every possible way.  Fed up with it all and hightailing their home before she does something rash, Leah drives aimlessly to get away from him and winds up, out of gas, at a diner where she meets Mary May, an acolyte to cultist Davey Stone who believes an elixir made from a forgotten, thought extinct, plant will transcend their existence beyond the cruel world of the now.  What the elixir actually does is something far more horrifying.

Verbal abusers, cult leaders, murders.  The crazy doesn’t stop there in Thomas J. Marine’s debut feature film, “At Night Comes Wolves,” landing it’s anti-sexism and anti-misogynistic messages upon the world on digital platforms this month.  Marine comprises his three short 2015 through 2017 films – “Paris, My Love,” “The Call to Future,” and “Object in Reality” – together with central narrative to bring new life into each one of his projects and also create something new from half the work being already filmed years earlier. Marine, or TJ as credited, writes a genre abstract story out of the pieces he tries to puzzle together, wildly cutting and pasting his shorts together as he continuously self-funds that extends into the filler narrative of his 2021 film under his own copyright, leaving “At Night Come Wolves” as a piece of true work from an auteur.

Beyond the first scene of a bound woman to a chair, bleeding from her hungry eyes and mouth, “At Night Comes Wolves” opens with Leah, “On-Site’s” Gabi Alves in her sophomore feature film, coming under hellfire from her loathing husband Daniel (Jacob Allen Weldy). Alves comes off with the submissive, will-do-anything to be a pleasing wife starkly contrasted against Weldy’s take-it-all and give nothing sexist persona; however, their relationship strays into Daniel’s bizarre sexual fetishes and watching his sexually objectified wife become the plaything for another man, a black man to be specific. The scene is brief, but powerful, perhaps the most powerful 10 seconds in the entire film that could have been, or rather should have been, the very principal theme of “At Night Comes Wolves'” subjugating prejudice roots. Instead, Leah throws in the towel and deadheads to nowheresville, serendipitously running into cult acolyte Mary May (Sarah Serio) and cult leader Davey Stone (Vladimir Noel). Stone’s fancies himself as an alchemy enthusiast, mixing his vintage bottled potions of unmarked substances that produce a variety of outcomes, usually ones Stone doesn’t expect and that thinly becomes the plot point genesis of Marine’s shorts. The entire dynamic becomes a glass ceiling as the story kind of just ceases to make logical sense when Leah deliveres Stone and Mary May to Daniel in a reconnect from the past of bad blood crossing paths again and along for the ride is Daniel acolyte Susanne (Colleen Elizabeth Miller “Leaf Blower Massacre 2”) whose down to drink Daniel’s demented womanizing Kool-Aid. Joe Bongiovanni, Myles Forster, Madeleine Heil and Byron Reo are sprinkled into servitude of “At Night Comes Wolves'” contorted three prong story.

Marine might repurposed his shorts into a Frankenstein feature to resuscitate new life into his lifeless projects, but the concept of regurgitating material itself isn’t totally unheard of while also being not widely popular amongst the mainstream crowd and even well-backed, risk-taking B movies due to the innate choppiness consequence.  Whether the restructure comes in the form of a web episodes strung together as in Nicholas Tana’s “Hell’s Kitty” or from lengthy shorts of one continuous story as with Joe Lujan’s “Rust” being a prime example of his short films, “Rust” and “Rust 2,” having been meld together years later, the narrative planes always seem and feel fragmented and staggered to the point where convincing audiences of a seamless story becomes a blurred line of why even try as filming styles, crews, actors, and even equipment change over time and “At Night Comes Wolves” suffers from that very incoherency with an intended non-linear storyline inelegantly sewn together by backtracking segues. Marine has two, if not three, very different ideas floating around his feature with one being very poignant, another identifying ideological radicalism with sexism undertones, and the other being just for the hell of a horrific good time with the undead. Of course, you don’t ever see the finale coming because, let’s face it, there’s never an established clean and clear objective in the narrative that floats in time and space. Hell, I don’t even know if it’s supposed to be partly a comedy or not with the incorporated park ranger scenes with Joe Bongiovanni and Vladimir Noel that are offbeat funny. This is the hand Marine dealt himself and it wasn’t a pretty one, yet somehow his ambition made a semi-intelligible presentation of a cult group toppling another more depreciating cult group before transcending into the seedlings of the apocalypse. And all I can do by the end of the movie is ask myself, what the hell did I just watch?

Don’t let this review scare the preeminent pants off of you from checking out and judging for yourself TJ Marine’s 2015, 2017, or, maybe, 2021 released films within a film as “At Night Comes Wolves” hit digital platforms this month of April, including iTunes, Google Play, Fandago as well as available on cable and satellite VOD services. Clocking in at 77 minutes, the unrated “At Night Comes Wolves” is out now released by worldwide film distributor Gravitas Ventures.  Aside from that singular moment of marital dysphoria that leads into an uncomfortably potent fetish of sexual desires and some witty repartee between a pair of colorful characters, TJ Marine’s reworked story might actually weaken the mystifying intrigue of his shorts as he plucks holes and fills gaps with new footage in a forced teetering of trying to make a comprehensible notch in the movie market.

Rent or Own “At Night Comes Wolves” at Amazon.com!

A Hollywood screenwriter named Nicholas owns a very special household feline. Angel, his Cat, has a unique relationship with her owner Nicholas. Yet, their unbreakable bond has put a severe damper on Nicholas’s intimacy with women as Angel slaughters any and all who becomes close with her beloved human. When Nicholas finally catches wind of the reason behind his love life woes and learns that Angel is actually possessed by an obsessive and dangerous demon, he and his friends Adam, whose also his downstairs neighbor in the apartment complex, seek to exorcise Angel back to being a nice kitty, but all who’ve challenged Angel thus far have been unlucky enough to be scratched to death. A medium, two priests, and even a cat therapist haven’t seem to help Nicholas through the bombardment of weird dreams and death that surround him in his lonely and tiny one bedroom apartment.

Cat lovers beware! “Hell’s Kitty” is purring up your leg to claw you in this new horror-comedy by writer-director Nicholas Tana. If you had thought cats were already contemptible enough to begin with then sit down in your air freshening kitty litter and get a can of Friskies out because you’re about to take a 666 ride with this demon kitty. “Hell’s Kitty” is original a web series created by Tana that began all the way back from 2011 to 2015 and, since then, has been immensely popular through the inter-webs with the extra special casts of genre vets ranging from “The Hills Have Eyes'” Michael Berryman to “The Fog’s” Andrienne Barbeau. From the web series, the episodes were pieced together, forming one hairball adventure of Nicholas and his demon cat, Angel.

Aforementioned, Nicholas Tana headlines as himself because, essentially, “Hell’s Kitty” is based off true events of his turmoiled love life. Series regulars also become essential players in the film, such as Nicholas’s downstairs loafing neighbor and best friend Adam (Adam Rucho), Lisa Graves (Lisa Younger of “Cold Creepy Feelings”), and Dr. Laurie Strodes (Nina Kate of “Snake Club: Revenge of the Snake Women”). Then, there’s a slew of special guests that, at times, pay homage to the works that made them household names in horror or relating genres. Special guests that include “Children of the Corn’s” John Franklin and Courtney Gains semi-reprising their roles as Isaiah and Mordicia. Lynn Lowry (“The Crazies”), Doug Jones (“The Shape of Water”), Bill Oberst Jr. (“Coyote”), Kelli Maroney (“Night of the Comet”), Dale Midkiff (“Pet Sematary”), Lee Meriweather (Catwoman from “Batman” television series), Victoria De Mare (“Killjoy” franchise), and porn star goddess, and legend, Nina Hartley (“Pleasure Maze”)! That’s one heavy-hitting lineup! As a cherry on top, even a Killer Klown, you know, the ones from Outer Space, made an appearance! 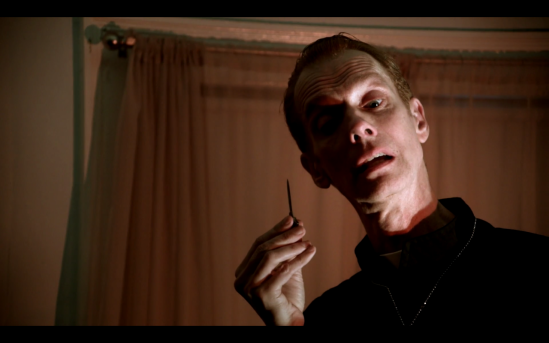 If a viewer didn’t know of or research into “Hell’s Kitty” web series past, the thought of low-budget junk just might scroll across a judgmental mindset. Let’s be honest for a second; “Hell’s Kitty” is grade-A camp with schlocky special effects and the editing quality of a ramshackle shackled ram. Along with the unique cast being intertwined into the story, other aspects of the Frankenstein-glued together film, such as the sharp pivoting subplots, stir up Nicholas ever so chaotic life into a new and interesting fold. From his fruitless sex life with various attractive women to the friend who always makes himself welcome in Nicholas’s apartment, Nicholas only has one consistent thing in his life and that is his relationship with the cat from hell and that journey is explored from episode-to-episode that climaxes with an ultra-drag musical rendition of something out of the “Birdcage.” Another quality to watch for, and enjoy, are the homages to fan favorites like “Children of the Corn” and “Killer Klowns From Outer Space” as mentioned before, “The Exorcist,” and “Psycho.”

MVDVisual and Wild Eye Releasing presents the Smart Media LLC,. production of “Hell Kitty,” as a whole, on DVD home video that’s visually subpar when considering the quality. The low bitrate crudely displays blotchy image quality, leaving details to the waist side. The 5.1 surround sound is the best attribute to the DVD with clear dialogue and a modest soundtrack. There are no extras included aside for the film’s trailer. While technically incompetent, “Hell’s Kitty” meows murderously onto DVD in a cultivation of cult actors and hellacious comedy by writer-director Nicholas Tana that does sometimes feel rehashed or borrowed from previous films, but the quirky evil pet element gnaws on an inner layer to be enjoyed and enthralled in a day-and-a-life of one man’s skewed, if not deranged, version of events of a lackluster romantic lifestyle blamed toward one jealous feline.

Add “Hell’s Kitty” to your collection!