Hellbent on being the first to discover something big between 1000-feet, talented marine biologist and ecologist, Olive Crown, constructs a convincing case in a video hiring application to test a deep sea diving suit invented by Dr. Fletcher, but a harrowing encounter with monstrous creature at 2500 feet nearly claims Olive’s life. Blamed for a botch dive and unable to remember the incident, Olive has been fired from her dream position, but when she double checks the dive suit for evidence of what might have happened, she discovers an alien substance, an egg-like object, attached to the outer layer and smuggles it home. The egg hatches to birth a blood thirsty, Cthulhu being that has marked Olive as in a symbiotic relationship as protector and mother. Olive senses everything the creature does, even it’s hunger, and caves in to her discovery’s need to feed with those who antagonize Olive and her creature baby, but at an alarming rate, the life form grows into a mammoth creature and Olive might be losing the perspective of who is really in control.

“The Creature Below” puts a spin on a popularly wild H.P. Lovecraft tale and adds a notch into the belt of the Cthulhu mythos. From director Stewart Sparke in his first feature film comes one woman’s tragically macabre endowment that runs amok through the uninteresting confines of her own life and obliterate it from within. Co-written by Paul Butler, the British Cthulhu feature, “The Creature Below,” melds together a very grand unearthly story into the restrictive walls of an unwanted love triangle Olive’s involved in while dipping toes into also being a pre-Romero zombie film with the automata slave. Though very modest in story and budget, “The Creature Below” is an itsy-bitsy speck in a bigger mythological genre and that’s usually the case for indie Cthulhu flicks, as they should be, because giving a little mystery to Lovecraft’s myth tends to build worlds later, sparks the imagination aflame, and leaves a lasting impression long after the movie is over.

Anna Dawson stars as Olive Crown, creature’s foster parent, and Dawson’s first impression of Olive emits a fierce, go-getter ecologist, looking to make a name for herself in the deep dive exploration field. That egotistical drive tapers off a bit once she’s canned for botched dive, delivering a more humble and reserved Olive Crown, but Dawson puts on the sunken-eyed, icy-cold skin that’s clammy and deadlike in order to fulfill the infant Cthulhu’s bidding. Daniel Thrace embraces the lovably sweet boyfriend, Matthew, whose sensible, charming, and overall nice guy. The pair are complete oil and water, a welcoming dynamic, when Olive’s rationality goes off track. Olive and Matthew are really the only two developed characters as, disappointingly, three considerable major characters don’t build too much of a reputation to warrant their value, especially with Olive’s sister, Ellie, played by Michaela Longden. There’s something more between Ellie and Matthew that doesn’t quite hit the nail on the head and there’s also more to her staying with her sister, Olive, that the audience is not aware of and the scenes where Olive comments on her sister’s freeloading just loses all it’s credibility. The other two actors, roles awarded to Johnny Vivash and Zacharee Lee, are more involved in Olive’s deep sea dive and bring more of a well rounded antagonistic or betrayal personality to the table. 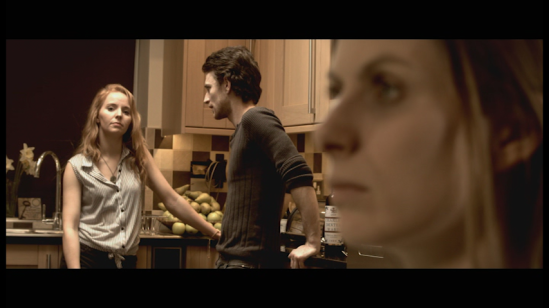 Sparke doesn’t linger too long on the creature, shielding it mostly behind a plastic tarp with a nude façade and that’s, perhaps, more in line with the micro budget constraints. In any case, Sparke focuses the story around Olive’s paranoia and obsession with the creature and with her boyfriend and the bitterness between him and her Sister, Ellie, seemingly toward Olive. Dave Walter has composed from start to finish a low and slow synth soundtrack, that’s familiar to a slowly anticipating heartbeat, and really heightens Olive’s spiraling paranoia similar to that of Ennio Morricone’s work on John Carpenter’s 1982 remake entitled “The Thing” where the eerily sounds of a personified isolation breaches every corner of your body, mind, and the dark room you’re in and all you can hear is that thump…thump…thump in a chest vibrating synchronicity of tones. While the soundtrack is riveting throughout, the story becomes a bit sluggish around the midsection in the sense that space and time don’t exists and Olive’s encounters with Dr. Fletcher, Dara, and various others, are halted to develop any kind of affluence amongst each other or with the audience. Even the ending, which I do adore on a certain level, bares the mark of being incomplete and devoid of substantiating that monolithic ending. There is some post-view satisfaction with the blend of practical and computer generated special effects and as I reflect on the film as a whole, to display a species from birth to adulthood, Sparke and his special effects team had amazing results that are fanned out well enough to leave a lasting impression of the unearthed creature’s visceral and intelligible girth. 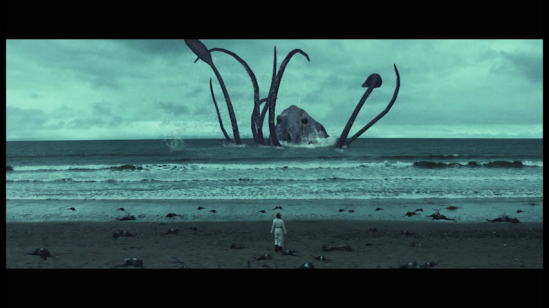 Breaking Glass Pictures with Dark Rift Films in association with High Octane Pictures release “The Creature Below” onto DVD. The 16:9 widescreen presentation of this sci-fi horror thriller explores a sleek and clean, with a hint of being just a little hazy, picture that puts forth the appropriate dark grey and blue tone for an underwater or above water creature feature. The English Dolby 5.1 sound’s slightly muffled, but solid. Special features include a behind-the-scenes, deleted scenes, “Rats” a short film, and a Frightfest Q&A. Stewart Sparke’s “The Creature Below” is not perfect and does have appalling, laughable moments, but underneath the surface is a UK film that’s budget-busting bold and aims to be a goliath in an indie market.

Unable to cope working as a hospice nurse, Danni begins a new life in a new apartment after separating herself from a server downhearted state while living with her uncle Gus. As Danni settles into her degrading new job involving saving the whales and into her small apartment, she begins to decorate her home, starting with hanging a simple shower curtain. However, as soon as she exits the bathroom, the shower curtain vanishes and so begins the mystery that leads to the discovery that she’s now part of secret order to protect The Gate, a passage way that can be used to give birth to the vilest evil. With the tireless help from her co-worker Tim, the two set off to stop The Gate from potentially destroying Dani’s life…or the world. 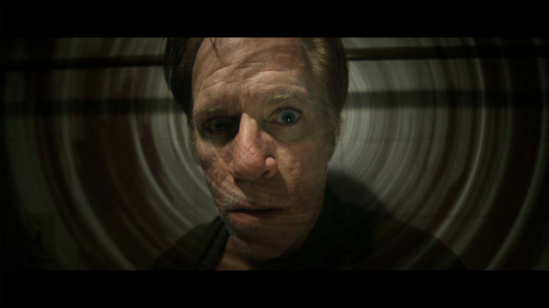 Movies like “Curtain” are the reason why I enjoy writing about them so very much. One tiny event, an event anyone would think couldn’t be turned into a full feature film, snowballs through the pages of a script and that script is presented to us by independent filmmakers Carys Edwards, writer, and Jaron Henri-McCrea, writer and director, of “Curtain.” The 74-minute film revolving around shower curtains being sucked into the bathroom tile opens with a seemingly distraught individual on an empty subway car, rambling and shaking after a reoccurring and thunderous dream that doesn’t make sense at that moment. The film’s hook comes early, sucking us into this man’s life when we learn he’s duck taped his bathroom door shut. He’s tensely afraid of the small enclosure to where one goes for unburdened release whether to drop a load or get cleaned up, but as the man decides to cut away the tape and opens the door to proceed in hanging a curtain, he unintentionally sets the stage for our heroine, Danni.

Solid performances all around by the cast. Danni Smith, portraying her namesake character, conveys a strong, defiant character even in the wake of her depressive struggle. Her characters goes through complete denial of the curtain eating bathroom, shutting down Tim, played by Tim Lueke, almost instantly when he’s curiously goes berserk of the possibilities of what to gain from this phenomenon. Tim Lueke does amazing work displaying a naïve activist and we discover the character’s humbleness through his naïveté, making him a likeable, standout character whose has motives that semi trump his passions when Danni is concerned. I really liked Martin Monahan and his Pale Man character, a blind gatekeeper, if you will, trying to protect the realms The Gateways portals. Monahan worked with director Jaron Henrie-McCrea previously, headlining Henrie-McCrea’s comedy-thriller “Pervertigo,” and the Indiana native takes a backseat, co-starring role that packs a memorable punch, leaving an everlasting mark of solemn and death.

If you haven’t noticed already, Henrie-McCrea has an affection for Alfred Hitchcock films. Between “Pervertigo,” a slight play of words from Hitchcock’s “Vertigo” starring James Stewart, to this film entitled “Curtain;” the shower curtain is an iconic set piece for Hitchcock’s more popular film “Psycho.” The Columbia University alumnus Henre-McCrea knits his own pattern into the Sci-Fi Horror film that is “Curtain,” subtly building-in comedy elements amongst the characters and not so much surrounding the situation. The young director has an eye for cinematography and bringing substance from the scene to the forefront as the director blends suspense, terror, comedy, and sadness, meshed together so intricately it’s seamlessly composites all genres that’s shot in some particular tight locations. The comedy stems from only certain characters such as the crass Preston The Super or Willy the homeless, paint can sniffer.

Much of Henrie-McCrea’s shock value spurs from intense close ups, as you’ll see in this articles screen shots. Quick, loud, and in your face scares or disturbances that’ll cause eye-popping jumps effectively note “Curtain’s” tone. This technique is very familiar with Evil Dead’s Sam Raimi and does bear a resemblance to a staple of 80’s horror with an Italian-like synth score by Adam Skerritt to match. Creature and special effects are briefly shown to obscure the possibility of detecting flaws (perhaps) and also to suggest that less is more, leaving more for the mind to fill out the horror’s of what you just saw. No scenes are left lingering on the horrific moments as much of “Curtain” is story centric, focusing on the mystery of The Gateway.

Frightfest presents the Icon Studio’s “Curtain” on DVD this July 18th in the UK. The DVD will be released in a gorgeous 2.35:1 anamorphic widescreen with a solid Dolby Digital 5.1 audio mix and an accompanying 2.0 stereo mix option. The DVD includes a film introduction, an presentation commentary, and an entertaining making-of featurette. I can’t comment too much on the audio and video since a DVD-R was available for screening. “Curtain” has a particular taste of comedy that’s favorably dry and on-point synced well to the horror mystery engulfing the genre. Director Jaron Henri-McCrea becomes a force to be reckoned with paired to the talented actors Danni Smith, Tim Lueke, and Michael Monahan. “Curtain” is everything that’s right with horror-comedies and nothing short of excellent independent filmmaking.